NAB reiterates its commitment to root out corruption from Pakistan 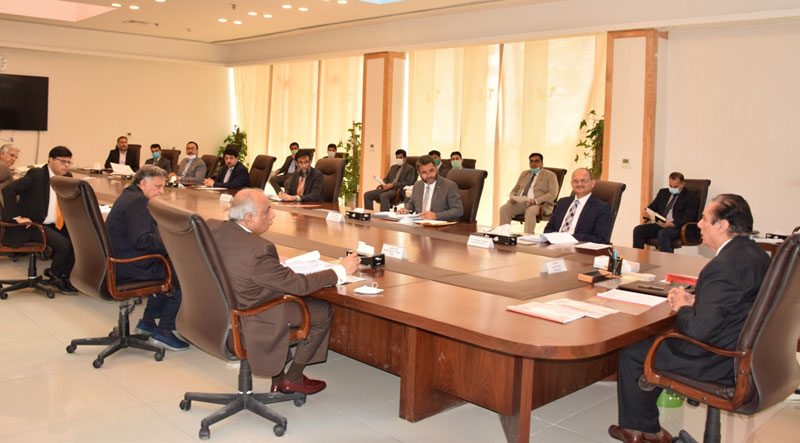 Chairman NAB Justice (r) Javed Iqbal chaired a meeting to review overall performance of the watchdog here at NAB Headquarters. During the meeting, it was informed that Operations and Prosecution Divisions of NAB are working closely in order to have legal assistance in conduct of complaint verifications, inquires, investigations as per law and pleading cases of NAB in respected Courts.

During the meeting, it was informed that the directions of the Chairman NAB, Prosecution Division have been revamped by inducting experienced legal consultants/special prosecutors. Due to constant deliberations, monitoring and performance analysis of Operations and Prosecution Division, the overall conviction ratio is approximately 68.8 percent in the respected Accountability Courts which is one of the best conviction ratios as compared to other anti-corruption organizations in Pakistan. NAB has not only recovered Rs. 466 billion since its inception but deposited in the national exchequer as per law.

NAB is an apex national anti-corruption organization which has no affiliation with any party, group or individual. NAB’s only affiliation is with the state of Pakistan. NAB will not come under any pressure/criticism of any accused person and will continue to work transparently, fairly, professionally and independently on the basis of solid evidence against the accused persons as per law. As per a report of the Gillani and Gallop survey, 59 people have shown confidence upon NAB. Pakistan is considered as a role model for SAARC Countries in eradication of Corruption due to NAB’s efforts. T

he World Economic Forum and Transparency International Pakistan have appreciated NAB’s efforts against corruption. Pakistan is the first Chairman of SAARC Anti-Corruption Forum which is a great achievement for Pakistan due to NAB efforts. He said that NAB is the focal organization of Pakistan under United Nations Convention against Corruption (UNCAC) which is pride for Pakistan due to NAB efforts. NAB is the only Organization in the world to which China has signed an MOU to oversee CEPC projects in Pakistan.

NAB has introduced a Combine Investigation Team (CIT) system in order to benefit from the collective wisdom of senior supervisory officers. This system is not only lending quality. NAB has established its own forensic science Laboratory in NAB Rawalpindi which is helping in improving the quality of investigations on a scientific basis. NAB has received more complaints in 2020 as compared to the same period of 2019 which shows that people have shown trust upon NAB. NAB has established more 50 thousand character building societies in Universities and Colleges in collaboration with HEC in order to aware youth about the ill effects of corruption at an early age besides establishing prevention committees in order to identify and to plug loopholes.

The Chairman NAB directed all bureaus of NAB to use all available resources to nab corrupt and arrest of proclaimed offenders and absconders so that they could be brought to justice and to recover looted money and deposit in national exchequer which is our national duty.