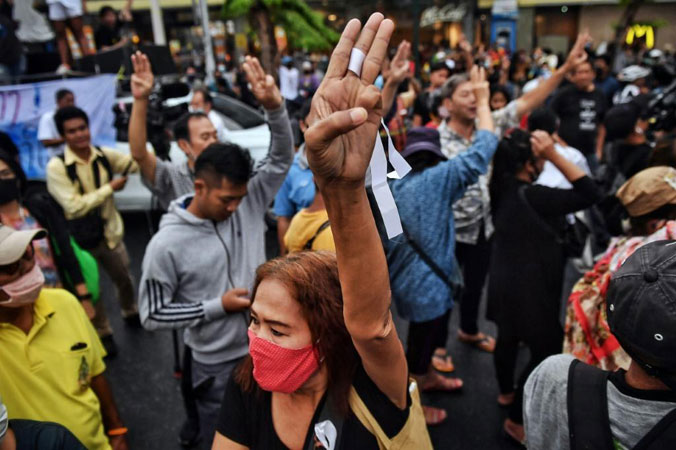 Police arrested 21 protesters Tuesday during a Bangkok rally that saw dozens of people give a royal motorcade a three-fingered salute — a show of defiance by Thai pro-democracy activists calling for reforms to the monarchy.

Some in the leaderless movement have also called for reform to the monarchy — a once-taboo topic due to Thailand’s harsh royal defamation laws.

Tuesday’s protest at Democracy Monument — a major intersection that has been the site of previous demonstrations — drew dozens of supporters chanting and dancing in front of police.

“Officers tried to negotiate with the protesters who were occupying the area. They were uncooperative,” he said.

Charges against the 21 protesters include obstructing police and “causing disorder”, said a police press release.

Demonstrators threw blue paint across the intersection — with some splashing uniformed officers — before the leaders were bundled into a van.

“They dragged, beat and pulled us away,” prominent activist Jatupat Boonpattarasaksa — who was among those arrested — said on a Facebook live broadcast from inside a police truck.

The royal family was scheduled to host the premier at the Grand Palace Tuesday, a public holiday to commemorate the death of the late long-serving King Bhumibol Adulyadej.