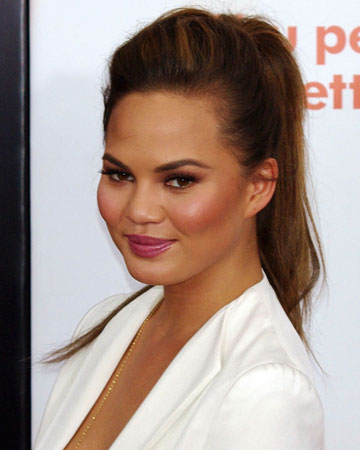 Chrissy Teigen expressed she was in good spirits over the weekend. The supermodel and cookbook author quietly returned to social media less than two weeks after suffering a pregnancy loss. On Saturday, Oct. 10, the Cravings author commented on an Instagram post by Betches.

The account uploaded a quote originally shared by Kara Morehart, which read, “Just booked an eyebrow waxing appointment and I’m excited I’ll be wearing a mask so I don’t have to hear ‘mustache too?'”

“It’s the little things,” Betches captioned the message. Soon after posting, Chrissy commented, “Finally, a giggle. Thank you.” The star’s response wasn’t lost on the Betches page, who replied, “it is an honor and a privilege.”

At this time, Chrissy hasn’t shared any content to her social media feeds following the tragic news that she lost her baby boy on Sept. 30. This was her and John Legend’s third child together. They have also been proud parents to Luna, 4, and Miles, 2.

Last month, Chrissy broke the news herself that she and John lost their little one. The update came a few days following her hospitalization, where she had to receive two blood transfusions.

“We are shocked and in the kind of deep pain you only hear about, the kind of pain we’ve never felt before. We were never able to stop the bleeding and give our baby the fluids he needed, despite bags and bags of blood transfusions. It just wasn’t enough,” her Instagram post began.

“We never decide on our babies’ names until the last possible moment after they’re born, just before we leave the hospital. But we, for some reason, had started to call this little guy in my belly Jack,” she continued. “So he will always be Jack to us.”

“Jack worked so hard to be a part of our little family, and he will be, forever,” she explained. “To our Jack—I’m so sorry that the first few moments of your life were met with so many complications, that we couldn’t give you the home you needed to survive. We will always love you.”

Before closing her statement, Chrissy thanked everyone for sending her and her family a tremendous amount of support and love.

“We are so grateful for the life we have, for our wonderful babies Luna and Miles, for all the amazing things we’ve been able to experience,” she expressed. “But everyday can’t be full of sunshine. On this darkest of days, we will grieve, we will cry our eyes out. But we will hug and love each other harder and get through it.”

In August, the couple revealed they were expecting their third child in John’s “Wild” music video. The pregnancy announcement was a total surprise to their millions of fans and even came as a shock to the supermodel herself.

“…What they say so often can be true. When you give up on trying, life has a way of surprising you,” she shared in August about wanting to get pregnant and not thinking it would happen. She had her two kids through IVF treatments.

“In summary, my boobs hurt… Also, you guys have seen how rough these past few months were for me here. So now you know why I just extra appreciated all the love and support through it all, especially since you didn’t even know. You just thought I was in stressful internet hell.”

Since the tragedy, Chrissy and John’s loved ones have expressed their heartache over their news, including Gabrielle Union, Viola Davis, Selma Blair, Channing Tatum and many others.