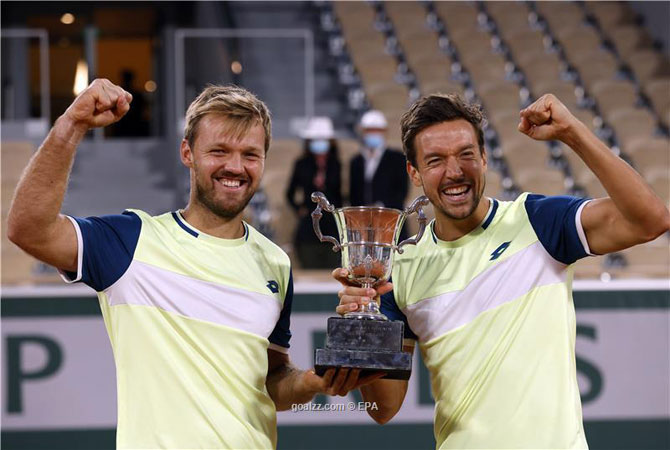 PARIS: German duo Kevin Krawietz and Andreas Mies retained their French Open doubles crown as they beat Croatian Mate Pavic and Brazilian Bruno Soares 6-3 7-5 on Saturday. A year after becoming the first all-German team to capture a Grand Slam men’s doubles trophy in the professional era, they again shone on the Parisian clay, winning in 89 minutes. The eighth seeds were clinical against the U.S. Open champions, breaking once in each set for victory and become only the fourth team to win back-to-back French Open titles. It has been a remarkable year for the two Germans, not least because of the COVID-19 pandemic that forced the suspension of the ATP Tour for six months, depriving them of an income. During the shutdown Mies helped deliver fruit to at-risk communities through his association with the Special Olympics while his partner stacked supermarket shelves in Munich. “It’s hard to describe what’s going through our heads right now,” 30-year-old Mies told reporters. “It’s unbelievable. I think this achievement is even bigger than winning last year. I think to win a Grand Slam title is always big, but to defend it is even more difficult.”