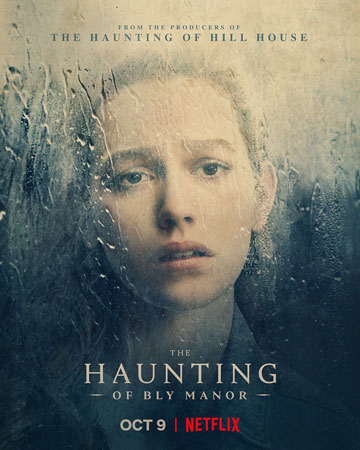 The Haunting of Bly Manor is the follow-up to The Haunting of Hill House, which was also created by Mike Flanagan. Both are part of the anthology series The Haunting. While Hill House tackled Shirley Jackson’s iconic horror novel of the same name, Bly Manor uses material from another famous piece of horror fiction, the late 19th-century novella The Turn of the Screw by Henry James. The story concerns a haunted house in rural England called Bly Manor. Victoria Pedretti’s Dani Clayton is the new governess to two orphan children who inhabit the house along with a housekeeper. Clayton is told by her employer and the children’s uncle, Henry Wingrave, that the last governess died on the premises. The first episode has Dani arriving at the Manor, and she begins to see strange people who the children’s uncle never mentioned were living inside the building. Also, Dani, who is an American, may have brought her own demons to the house. She keeps seeing a figure with holes for eyes in the mirror. The children are clearly aware of the ghostly presence and even appear to communicate with them.