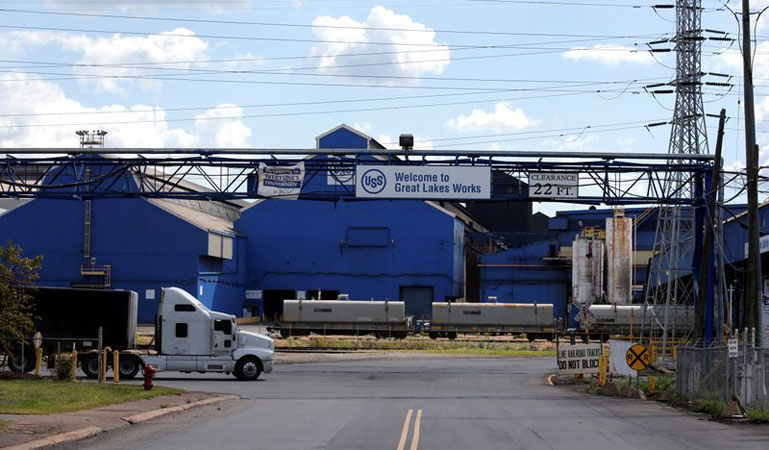 President Donald Trump promised a new dawn for the struggling U.S. steel industry in 2016, and the lure of new jobs in Midwestern states including Michigan helped him eke out a surprise election win.

Four years later, Great Lakes Works – once among the state’s largest steel plants – has shut down steelmaking operations and put 1,250 workers out of a job. A year before the June layoffs, plant owner United States Steel Corp called off a plan to invest $600 million in upgrades amid deteriorating market conditions.

Trump’s strategy centered on shielding U.S. steel mills from foreign competition with a 25% tariff imposed in March 2018. He also promised to boost steel demand through major investments in roads, bridges and other infrastructure.

But higher steel prices resulting from the tariffs dented demand from the Michigan-based U.S. auto industry and other steel consumers. And the Trump administration has never followed through on an infrastructure plan.

Michigan’s heavy reliance on the steel and auto industries puts Trump’s trade policy in sharp focus ahead of the Nov. 3 presidential election in this battleground state. Democrats say they aim to recapture the votes of blue-collar workers they lost to Trump four years ago – one key factor in his victory over Hillary Clinton. Trump won Michigan by less than one percent of the statewide vote total. The competition for the votes of often-unionized manufacturing workers – who historically have voted Democratic – will be just as fierce in the battleground states of Wisconsin and Pennsylvania, political analysts say.

Biden leads Trump in Michigan by 8 percentage points, according to a Reuters/Ipsos state opinion poll of likely voters conducted from Sept. 29 – Oct. 6, widening his lead from a few weeks earlier.

Nationally, the steel industry has been shedding jobs for the past year – since before the wider economic downturn caused by the COVID-19 pandemic – and now employs 1,900 fewer workers than it did when Trump took office, according to U.S. Labor Department data. (For a graphic on steel jobs, click https://tmsnrt.rs/2SRIEaF)

While the tariffs failed to boost overall steel employment, economists say they created higher costs for major steel consumers – killing jobs at companies including Detroit-based automakers General Motors Co and Ford Motor Co. Nationally, steel and aluminum tariffs resulted in at least 75,000 job losses in metal-using industries by the end of last year, according to an analysis by Lydia Cox, a Ph.D. candidate in economics at Harvard University, and Kadee Russ, an economics professor at the University of California, Davis. In all, they estimated, the trade war had caused a net loss of 175,000 U.S. manufacturing jobs by mid-2019.

In Michigan, steelmakers have served layoff notices to nearly 2,000 workers since the tariff took effect, according to a Reuters analysis of the notices steel companies filed with the state. The state’s primary metals manufacturing industry, which includes iron and steel mills, employed about 7,300 fewer workers in August than in March 2018, when Trump announced metal tariffs, according to data from Federal Reserve Bank of St. Louis.

The steel-industry setbacks account for just a fraction of the job losses in Michigan’s manufacturing sector – which now employs 55,100 fewer workers than it did when Trump took office in January 2017, U.S. Labor Department data shows. The state’s automotive industry accounted for 35% of the manufacturing job losses, according to the St. Louis Fed.

Whether such statistics will change swing-state voters’ minds remains to be seen. Bill Wischman, a financial manager at a Ford manufacturing facility in Plymouth, Michigan, says Trump has done more to protect U.S. manufacturing than any of his predecessors.

“He has given a whole-hearted effort,” said Wischman, 51, a Republican who voted for Trump in 2016.

“I don’t see any policy that helped us,” said Kemper, who is backing Biden. “We are losing our damn jobs here.”

The 1.2 million-member United Steelworkers (USW) Union, which represents U.S. manufacturing workers in many industries, supported Clinton in the last election and will again back the Democrat this time. Kemper acknowledged that many of his co-workers voted for Trump in 2016 but says that support has diminished along with the fortunes of Michigan’s steel industry.

Trump made similar 2016 campaign promises to revive the ailing coal industry by rolling back environmental regulations. But that industry’s employment has dropped 9% since 2016, to about 46,000, as 66 coal plants – nearly a fifth of the U.S. total – have closed. The economic losses come despite the administration’s moves to ease restrictions including limits on carbon emissions and dumping coal waste into streams.

The Republican party in Michigan did not respond to requests for comment. White House Trade and Manufacturing Policy Director Peter Navarro did not answer questions from Reuters on the data showing job losses in steel and manufacturing.

When U.S. Steel idled Great Lakes Works, which primarily serves the automotive industry, it cited weak demand, lower steel prices and a new corporate strategy to invest in more cost-efficient technology. In May, Cleveland-Cliffs Inc said it was closing its hot strip steel mill and some other operations in the Detroit area and laying off 343 workers. It cited “rapidly deteriorating business conditions.”

A Cleveland-Cliffs spokeswoman did not answer questions about the impact of Trump’s trade policy on its business.

U.S. Steel defends Trump’s tariffs. Company spokeswoman Meghan Cox said the policy helps “ensure the strength of America’s steelmaking capacity during this pandemic.” The firm’s shares have plunged about 82% since the beginning of March 2018 – the month Trump announced steel tariffs – compared with a 28% increase in the S&P 500 during the same period. U.S. steel prices are now 33% below their peak in May 2018 but remain 21% higher than the global market price because of tariffs – a gap that hurts the competitiveness of U.S. companies who fashion products from domestic steel.