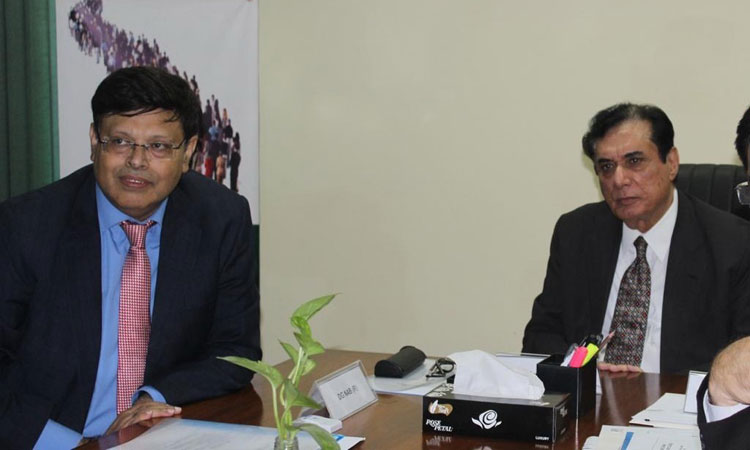 NAB Chairman Justice (r) Javed Iqbal has said that NAB Rawalpindi is flagship regional bureau of the watchdog which has played a prominent role in contributing towards the overall performance of the organisation.

He said that NAB’s top most priority is on cases of mega corruption cases, money laundering, misuse of authority, assets beyond known sources of income, embezzlement of state funds, cheating the public at large, housing/cooperative scams and Modarba/Masharka scandals etc. Since NAB’s inception, one of NAB’s major achievements has been the recovery of around Rs. 466/- billion of ill-gotten money which was deposited in the national exchequer which is a remarkable achievement of NAB. He appreciated the performance of NAB Rawalpindi under the supervision of Irfan Naeem Mangi, DG NAB Rawalpindi for recovering Rs. 23 billion in fake accounts cases on account of plea bargain which is deemed conviction.

Justice (r) Javed Iqbal, Chairman NAB said that NAB has established its first Forensic Science Lab (FSL) in NAB Rawalpindi which has facilities of Digital Forensics, Questioned Documents and Fingerprint Analysis. The Chairman NAB said that NAB has rationalized its workload and timelines have been prescribed for efficient, effective and expeditious disposal of cases. NAB has also introduced a new System of Combine Investigation Team (CIT) in order to benefit from the collective wisdom of senior supervisory officers, a system of CIT comprising of Director, Additional Director, two Investigation Officer, financial expert, land revenue expert and a Senior Legal Consultant has been put in place which lending quality to the work. Justice Javed Iqbal, Chairman NAB said that NAB had adopted an effective Anti-Corruption Strategy i.e.; Enforcement, Awareness and Prevention to eradicate corruption and to aware people about the ill effects of corruption at large. He said that NAB’s performance has been appreciated by reputed national and international organizations which are proud of Pakistan due to NAB’s efforts.

Javed Iqbal, Chairman NAB said that our success as country’s biggest apex anti-corruption agency inspires us to redouble our efforts in performance of our national duty with more dedication and commitment to eradicate the menace of corruption from our beloved motherland Pakistan in all its forms and manifestations. He said that our overall conviction rate in the trial court is about 68.8 percent which is one of the best conviction ratios as compared to other any corruption organizations. He said that today NAB’s about 1230 corruption references are under trial and their approximate amount is Rs. 943 billion. He said that NAB is the first chairman of SAARC Anti-Corruption Forum. NAB is the only Organization in the world to whom China has signed Memorandum of Understanding (MoU) in order to streamline cooperation in the field of anti-corruption and oversee projects being undertaken China-Pakistan Economic Corridor (CPEC).