* An insider shares that the young royals arrived after Katharine and David, adding, ‘Harry was very attentive and had his hand on Meghan's back as he guided her inside’ 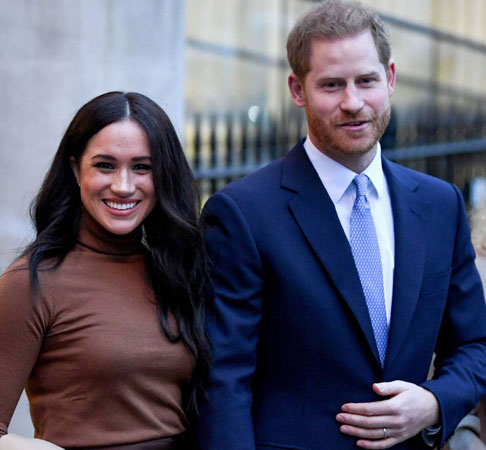 Meghan Markle and Prince Harry enjoyed a night out on the town with their friends Katharine McPhee and David Foster.

E! News confirms the Duke and Duchess of Sussex and their musician friends were spotted enjoying a low-key dinner at Lucky’s restaurant in their new hometown of Montecito, Calif. on Tuesday night.

An insider shares that the young royals arrived after Katharine and David, adding, “Harry was very attentive and had his hand on Meghan’s back as he guided her inside.”

And it would seem the double date was a success! According to the source, the two couples spent at least three hours at the restaurant, where they “leisurely” dined in an outside area covered by shrubbery and trees.

Following their meal at the steakhouse, the insider says the A-listers went their separate ways, with Harry being ever the gentleman and escorting his wife back to their car.

Perhaps the dinner was a celebration of Katharine and David’s recent pregnancy news, although it’s fair to assume that Meghan and Harry knew about the bun in the oven long before the rest of the world did.

Earlier this year, it was revealed that David had been the one to arrange for Meghan and Harry to live at the Canadian retreat where they spent their holidays. He previously explained, “I was really happy to be able to help them to find a respite just to take a little time off.”

And while one may assume that the two couples became friends because of their star status, the truth is far more relatable than imagined: Katharine and Meghan went to the same high school.

David added that they all rekindled their friendship in recent years, explaining, “We actually met Meghan and Harry at D-Day in London maybe a year ago. Immediately we were drawn to them, like everybody is, and I was just happy to help.”

With Katharine now pregnant, she and Meghan have even more in common, seeing as the Duchess is a new mom herself.

Maybe after the arrival of Katharine’s little one, the moms will enjoy an Aperol spritz together. On the Smash star’s Instagram Story, she opened a gift from the alcoholic beverage company and joked, “I won’t be drinking this anytime soon—wink, wink.”