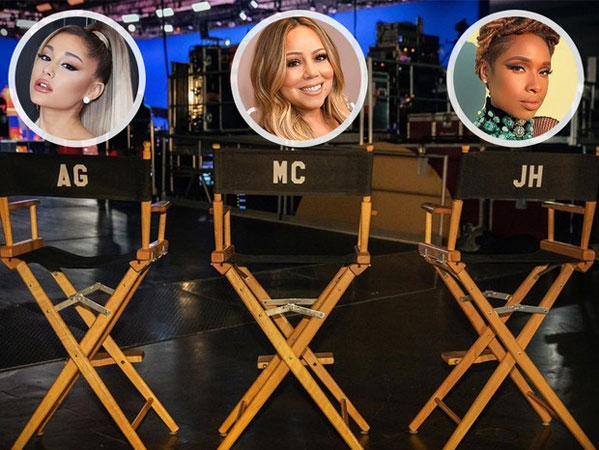 We don’t want a lot for Christmas, but we do need a holiday collaboration from Mariah Carey, Jennifer Hudson and Ariana Grande!

On Twitter Oct. 9, Mariah caused a buzz amongst fans when she shared a photo of three chairs. One was labeled “AG,” the other “MC” and the third “JH.” Mariah also included a Christmas tree emoji, suggesting that whatever she had cooking would involve the holidays in some way.

Naturally, fans freaked out, thinking that the queen of Christmas was releasing a new song to rival the chart topping hit “All I Want for Christmas is You.”

This collaboration would be a big deal, not only because it would unite three vocal legends, but because it would finally squash any rumors of beef between Mariah and Ariana. Early in her career, Ariana’s look and vocals were compared to Mariah’s, a comparison that Mariah’s former husband Nick Cannon claimed bothered the “We Belong Together” singer.

Fortunately, all seemed totally friendly between the superstars in March of 2019, when Ariana wished Mariah a happy birthday, and the star responded with a warm “thank you” on her Instagram story.

Jennifer is a longtime fan of Mariah’s, so it makes sense that the two would possibly collaborate. In 2019, the Oscar winner presented Mimi with the Icon Award at the Billboard Music Awards.

If this Christmas collab does happen, it will be iconic times three!