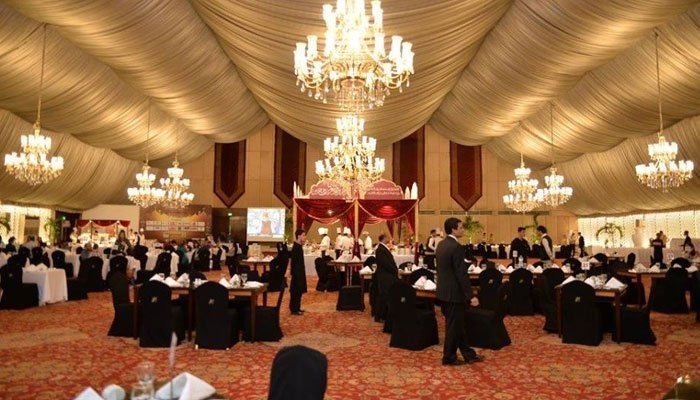 The National Command and Operation Centre (NCOC) on Friday issued new guidelines for marriage halls, saying that it is officially restricting the number of guests and limiting functions till 10pm.

A statement issued by the NCOC said that new guidelines were formed after in-depth deliberations and have been shared with the provinces for strict implementation to curb the spread of the novel coronavirus.

Under the new guidelines, apart from the limits imposed on the capacities, the events can only be held for two hours and must end by 10pm. The statement said that if marriage halls are found to be in violation of the SOPs then they will be closed off at a ‘specified time’ and a heavy fine will also be imposed. It further said that the closure of SOPs-defying marriage halls will come into effect two weeks after the notices are served so people get ‘sufficient time’ to search for alternate venues. The NCOC also said that the marriage hall owners will be required to reimburse the full amount to the families in case of closures.

The NCOC discouraged ‘large-scale public gatherings’, saying they have the ‘potential to cause exponential increase’ in the coronavirus. It also said that such gatherings will also ‘jeopardise the success achieved’ against coronavirus and should ‘ideally be avoided’. “If some public gatherings are unavoidable, then these must be organised with strict compliance of the SOPs, for which deliberations are currently underway and will subsequently be decided at the NCOC,” said the statement.

Meanwhile, the total active Covid-19 cases in Pakistan on Friday were recorded at 8,335 as 661 more people tested positive for the deadly virus during the last 24 hours. Eight coronavirus patients, six of whom were under treatment in hospital and two out of the hospital died, according to the latest update issued by the NCOC. No Covid-affected person was on ventilator in Azad Jammu and Kashmir (AJK) and Balochistan, while 67 ventilators elsewhere in Pakistan, out of 1,912 allocated for COVID-19 patients, were occupied.