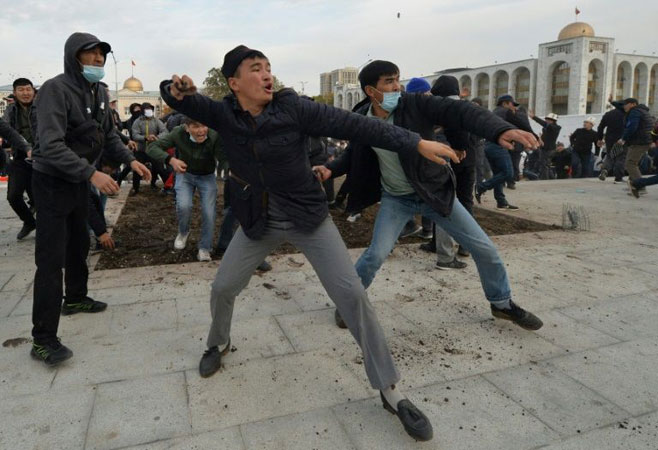 At least five people were injured during fresh clashes between rival groups in Kyrgyzstan on Friday as the volatile Central Asian country slipped deeper into crisis.

Political factions were jostling for power as President Sooronbay Jeenbekov ordered military forces to enter the capital after claiming he was ready to resign to calm tensions.

Fresh clashes broke out Friday afternoon between followers of rival politicians in the centre of capital Bishkek, where one of the groups — an opposition bloc representing several parties — was holding a rally.

One of the five injured during the violence was a prominent youth activist, whom the bloc has proposed as the country’s new deputy prime minister.

Tilek Toktagaziyev, 29, suffered concussion and was hospitalised after being struck by stones, the health ministry told AFP.

Almazbek Atambayev, a former president who was released from jail by supporters during a night of tumult this week, claimed that his car was struck by bullets during the clashes in a video shared on social media.

“The former president’s car was hit with live ammunition,” Kunduz Joldubayeva, a spokeswoman for the ex-leader, told AFP.

The assailants were believed to be loyal to Sadyr Japarov, a populist politician who is pressing his own claim to be head of government after hundreds of his supporters flooded the capital in the aftermath of the vote.

The conflict between the two groups began with fist fights, said an AFP corespondent, who heard shots fired but could not verify the former president’s claim.

There has been little evidence of a central authority in Bishkek since a disputed parliamentary vote on Sunday sparked protests that morphed into violent unrest leaving one dead and more than a thousand injured.

On Friday, Jeenbekov signed off on the resignation of the government in place before the election, which opposition parties say was rigged by massive vote-buying in favour of parties close to the president.

Election officials said a date for fresh elections would be set before November 6.

Jeenbekov said in a statement early Friday that he was prepared to step down once a new government is formed “and we are back on the path of lawfulness.”

Later the same day he declared a 12-day state of emergency in Bishkek, including tight controls on movement in and out of the capital. Eyewitnesses saw heavy military vehicles rolling into the city on Friday night.

Russia is the dominant foreign power in Kyrgyzstan and has attempted to broker disputes in the past.

“We have that experience,” said Zas.

Kyrgyzstan is known for a notoriously unstable political system and alliances between power brokers in the poor country of 6.5 million people rarely stand the test of time.

Atambayev and Jeenbekov were once friends, but the pair fell out not long after Jeenbekov won the presidency with backing from Atambayev in 2017.

But he stood shoulder-to-shoulder with the former president and in opposition to both Japarov and Jeenbekov on Friday, looking to bolster his own chances of heading a new government.

Atambayev, 64, whose presidency was dogged by corruption allegations, claimed that he was not interested in taking up a new political position as he addressed supporters in Bishkek.

“Atambayev doesn’t need some sort of position. Atambayev needs his people to have a future,” the former leader said.

President Jeenbekov for his part criticised the “exorbitant ambitions of some politicians” in a statement but did not mention any names.

Supporters of various rival groups had gathered across the capital earlier in the day but none openly backed Jeenbekov.

Japarov, a headstrong nationalist, says lawmakers backed his claim to be prime minister in a secretive vote in a hotel on Tuesday.

But Jeenbekov only signed off on the resignation of the cabinet and the previous prime minister on Friday.

Japarov had been serving an 11-year jail sentence for hostage-taking prior to regaining his freedom on Monday.

Former president Atambayev was serving an 11-year sentence for his role in the illegal release of a crime boss during his presidency.

If Jeenbekov were to resign, he would become the third leader from the former Soviet country to be felled by political unrest after uprisings unseated authoritarian presidents in 2005 and 2010.