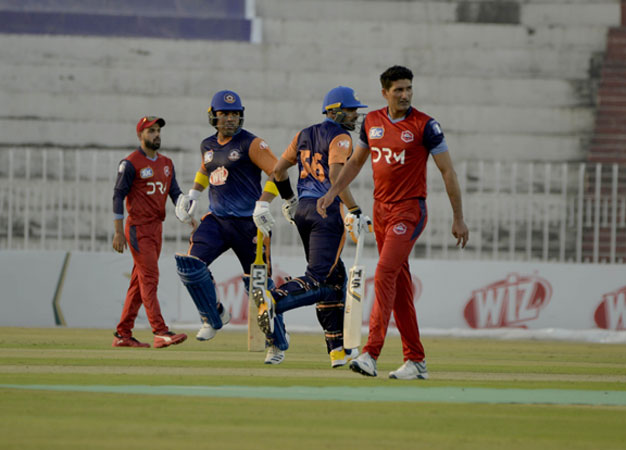 RAWALPINDI: Babar Azam led from the front to guide Central Punjab to a commanding eight wicket victory over the defending champions Northern in the 15th match of the National T20 Cup for First XI teams and the first of the 19 matches scheduled at the Rawalpindi Cricket Stadium. Northern who entered the match on a 10-match winning streak in the National T20 Cup had no answers to Babar’s brilliance with the bat. Babar and all-rounder Faheem Ashraf (man-of-the-match) made their first appearance in the tournament a truly memorable one with match winning performances. Set a 166-run victory target, Central Punjab coasted to 167 for two in a mere 17 overs with Babar returning unbeaten with a typically elegant 86 off 52 balls (11 fours, two sixes). Faheem followed his four-wicket bowling spell to make 52 off 26 balls; his innings included two sixes and seven fours. The two added 105 runs for their unbroken third wicket partnership in a mere 51 balls.

Central Punjab had lost Kamran Akmal for 21 and Abdullah Shafiq for three when Faheem joined Babar at the crease. Reflecting on his performance, Faheem Ashraf said: “My performance today is due to prayers, especially since I was struggling recently. Our team’s mindset today was to try and win the game, my aim when batting with Babar was to ensure that we bat till the end, Babar asked me to stay till the end as that will ensure a comfortable victory for us.” Batting first after winning the toss, Northern made a fine recovery to post 165 for nine after their top-order was removed by an inspired spell of pace bowling by Faheem who took three wickets in his two over opening burst conceding a mere seven runs.

Faheem sent back Zeeshan Malik (9), Sohail Akhtar (17) and Rohail Nazir (4) to leave Northern tottering at 52 for four. Left-armer Sohaibullah had made the first breakthrough when he dismissed Umar Amin for a duck. Northern were rescued by an 87-run (56 balls) stand for the fifth wicket between Asif Ali and Shadab Khan. Asif hit five sixes and four fours in his 40-ball 67-run effort. Shadab scored 39 off 25 balls, striking five fours in his innings. Northern were however finished a few runs short at the end as the lower-order failed to sustain the momentum provided by Asif and Shadab.

Faheem added Hammad Azam’s wicket in his second spell to finish with four wickets for 18 runs. Usman Qadir (two for 36) and Ehsan Adil (two for 37) were the other main wicket-takers for Central Punjab. Meanwhile for Northern captain Imad Wasim and Sohail Akhtar made their first appearances of the tournament while Haris Rauf was brought back in the playing eleven.