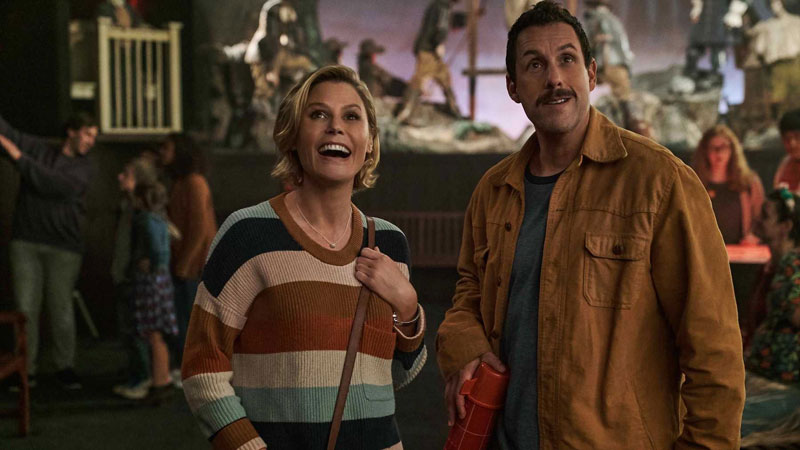 Barring a few exceptions, Adam Sandler has revelled in doing comedy movies that are decent enough to watch once and then forget.

After Uncut Gems, it appears he is back to doing fluff.

It is not necessarily a bad thing. Fluff has its own place. Sometimes, one does not want anything that taxes mind. Hubie Halloween is a classic Adam Sandler film, in which he is once again doing a ridiculous voice.

The film, directed by Steven Brill, is about Sandler’s Hubie Dubois. A town dunce who is an object of ridicule for pretty much everybody in Salem, he owns and runs a deli. But the job he is really passionate about is to roam around the town on Halloween night and make sure nobody is harmed, and everybody plays it safe. Oh, and the etiquette is followed.

It is not necessarily a bad thing

Of course, hardly anybody believes his job is serious. Whenever he goes out on his bicycle, he has to dodge stuff thrown by bored small-towners using him as their source of entertainment. Hubie has also made himself a nuisance for the local police department with his frequent visits and constant phone calls.

But when trouble arrives for real, it is up to Hubie to play the saviour. Is it the eccentric neighbour with lupine tendencies? Is it that person wearing a Professor Pyg mask? Or somebody else altogether?

If you are paying attention, the film has an absolutely absurd premise and its effect is only amplified by Adam Sandler’s portrayal of Hubie. The character looks and sounds like a grade-A moron and is treated as such. And yet, he can be astonishingly intelligent whenever the plot feels, is convenient. This is not criticism, mind you. If the movie tried to make its plot plausible, it would arguably not be so much fun.

It is hard to categorise Sandler’s performance in the film. He is clearly and probably deliberately overdoing it and thinks it is funny and yet Hubie Dubois somehow seems like a real person that you might know.

Many jokes land, a few don’t. The brisk pace of Hubie Halloween makes sure boredom is kept at arm’s length. There are so many guest appearances by famous actors in this film that I found myself paying attention to each on-screen character to find out if that is not a disguised actor.

Overall, Hubie Halloween is a likeable movie. It is fun despite everything. It will make you laugh, and will keep you hooked for every one of those 100 minutes. There are worse ways to spend time.