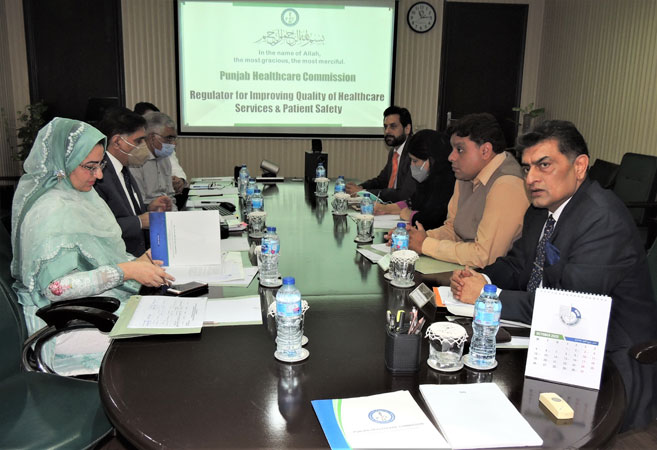 The briefing was held under NAB’s A&P domain in which updates on part of PHC were discussed regarding comparative studies over provision of standard of services and the dues being charged by Private Hospitals. During the briefing, the PHC officials highlighted their mandate, domain and performance of PHC over the above issue.

At this occasion, NAB Lahore made it clear about NAB’s mission to regularize and maintain suitable rates in all Private Hospitals in accordance with PHC’s proposals, whereas, NAB Lahore’s officials raised queries over grading system of Hospitals and Doctors, as well. It was also discussed that as per the efforts of NAB Lahore, Chughtai Lab announced to waive off 50% charges of Corona Testing for senior citizens that was lately extended to all citizens. NAB Lahore also explained that limited resources caused govt hospitals hindrance in provision of quality services while Private Sector gained advantage to this lapse.

PHC clarified that, the Commission wanted from all private Hospitals to upload their procedural charges along with Rooms’ costing on their websites and the same may be displayed on boards of every Hospital. They stated that cost determining of more than one lac (1,00,000) procedures is a herculean task while maximum work by PHC has been done in this regard. PHC officials also showed fears that by determining affixed rates for procedures to all Hospitals would compromise quality of services. The PHC officials also provided NAB Lahore with lists comprising proposed charges of Surgeons, Consultants and rooms’ charges of private Hospitals.

A&P Wing of NAB Lahore also directed for provision of agreed proposals by Board Meeting which is being held on 10th of October 2020.