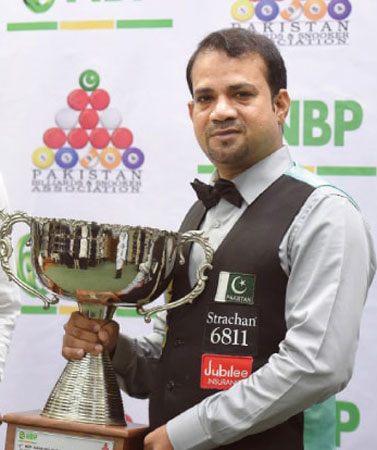 After shining at the junior level, it was a phenomenal rise for 20-year-old Haris who entered the contest on wildcard as national U-21 champion. It is pertinent to mention that Haris had also pocketed the national U-18 title last year. Haris, who is junior international, received a big boost when NBP chief announced upgradation of his post to contract level besides Naseem Akhtar. At the outset, experience made the difference between the two cueists as Sajjad, 35, settled quickly and raced to take 4-0 lead in the final.

Haris made a breakthrough by taking the fifth and seventh frames but trailed 2-6. He again came back into the match by taking next three frames to narrow the deficit 5-6. Sajjad took the 12th frame only to lose 13th before grabbing the next to establish his authority. A beaming Sajjad received glittering trophy and a cash prize of Rs100,000 from National Bank of Pakistan President Arif Usmani amidst applause. Haris received runner-up trophy and runner-up purse of Rs40,000. The Pakistan Billiards and Snooker Federation (PBSF) top hierarchy unawwar Hussain Shaikh, Zulfiqar Ramza and former president Alamgir Shaikh were also present besides bank’s other senior executives.