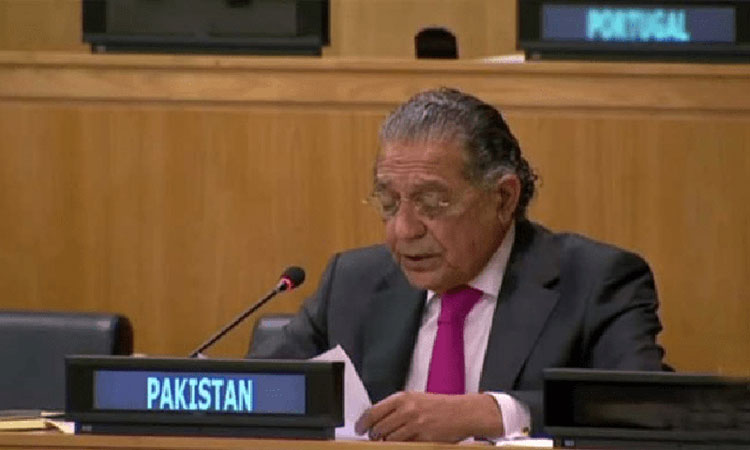 Pakistan, speaking for 55 countries at a United Nations panel, has said that Hong Kong affairs are China’s internal matters, and underscored the importance of non-interference in the domestic affairs of sovereign states – a basic international norm.

Ambassador Munir Akram, the Pakistani permanent representative to the UN, was responding to a statement made by Germany, on behalf of a group of mainly western countries, that expressed concern at the impact of China’s new national security law on human rights in Hong Kong.

“The Hong Kong Special Administrative Region is an inalienable part of China and Hong Kong affairs are China’s internal affairs, that brook no interference by foreign forces,” the Pakistani envoy told the General Assembly’s Third Committee, which deals with social, humanitarian and cultural matters.

In his remarks, Ambassador Akram named the 55 countries which authorised him to speak on their behalf, and said they supported China’s “one country two systems” policy and stressed that legislative power on national security in any country rests with the state.

“The enactment of the law of the People’s Republic of China on safeguarding national security in the Hong Kong Special Administrative Region is a legitimate measure that ensures one country, two system goes steady and enduring, and that Hong Kong enjoys long term prosperity and stability,” he said.

“The legitimate rights and freedoms of Hong Kong residents can be better exercised in a safe environment.”

He categorically rejected the disinformation that some countries were spreading to discredit China and attempting to meddle in its internal affairs, using the excuse of human rights.

Meanwhile, Foreign Minister Shah Mahmood Qureshi on Wednesday said that the bilateral relations between Pakistan and Saudi Arabia were deep and historic in nature and the similarities between the two countries on important regional and global issues were very pleasing.

He expressed these views while having a telephonic conversation with his Saudi counterpart Prince Faisal bin Farhan Al Saud, according to the Foreign Office.

During the conversation, bilateral relations, situation in the region and issues of mutual interest were discussed.

Qureshi said that the two countries always openly supported each other during adverse circumstances.

The foreign minister reiterated Pakistan’s support to Saudi Arabia against any threat to its security and territorial integrity. He also condemned attacks by the Houthi militia on the kingdom.

“We stand shoulder-to-shoulder with Saudi Arabia to safeguard its integrity,” he said and added that the protection of the holy sites was integral part of our faith.

Both leaders agreed to continue the discussion on important regional and global issues.

Saudi Arabia and Pakistan typically share strong ties, and in 2018 Saudi Arabia loaned $3 billion to Pakistan as well as oil credit worth $3.2 billion to assist with the balance of payments crisis.

However, Riyadh was irked by criticism from Pakistan that Saudi Arabia has been lukewarm on the Kashmir’s territorial dispute, prompting Chief of Army Staff General Qamar Javed Bajwa’s fence-building visit.

In August, Pakistan returned $1 billion of the $3 billion debt owed to Saudi Arabia to avoid default on international debt obligations after the kingdom decided to reduce its financial support, according to highly placed sources.