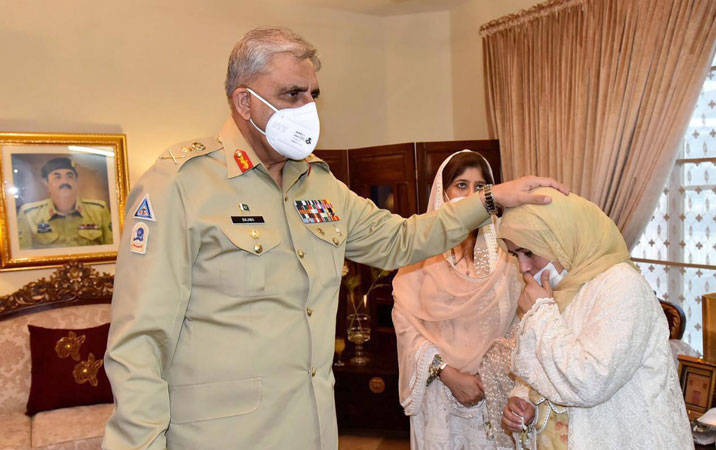 Chief of Army Staff (COAS) General Qamar Javed Bajwa and his wife visited the family of Colonel Mujeeb Ur Rehman, who embraced martyrdom during an intelligence based operation (IBO) in Khyber Pakhtunkhwa’s Tank district in March.

The army chief offered Fateha and prayed for departed soul, the Inter-Service Public Relations (ISPR) said in a statement.

“Sacrifices rendered by our officers and men shall never go waste. Our fight against terrorism shall continue till achievement of enduring peace and stability,” Gen Qamar was quoted by the military’s media wing as saying on the occasion.

Colonel Mujeeb embraced martyrdom while security forces foiled a major terrorist attack during the security operation near Tank earlier this year. Two high-value terrorists were killed during the operation.

During the sanitisation operation, a large cache of arms and ammunition were also recovered from the terrorist hideout, according to the ISPR.

Col Mujeeb, who hails from Bunji, Astore, is survived by a widow, three sons and a daughter.

The president said that the entire nation is united and determined in the war against terrorism. “Security forces have eliminated terrorism by rendering immense sacrifices,” he added.

Alvi also prayed for the departed soul and commiserated with the bereaved family.

PM Imran in a statement hailed the courage and bravery of Colonel Mujeeb and prayed for the departed soul. “The entire nation acknowledges the sacrifices of the armed forces and security institutions,” he added.

The premier said it is the outcome of the unprecedented sacrifices of the security forces that terrorism has been eradicated and the lit of peace stands alighted.

During the multi-faceted campaign, the military carried out more than 49,000 IBOs to foil terror attacks and prevent militants from disrupting life across the country.