Defiant Trump in risky COVID-19 gambit weeks before US election 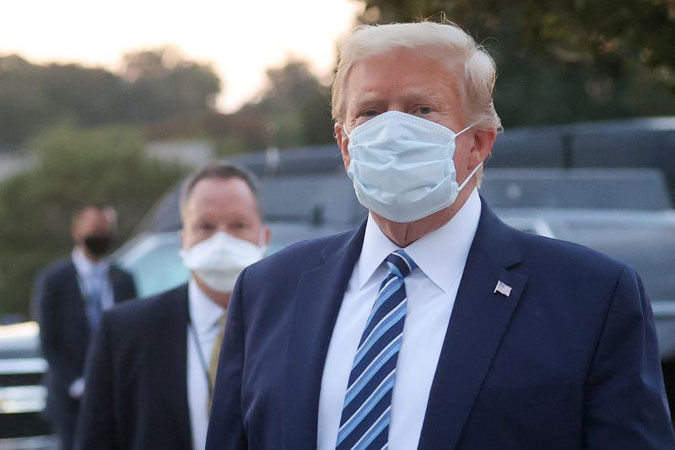 With polls showing him trailing Democrat Joe Biden with less than a month to go before the US election, President Donald Trump appears to be re-embracing the risky strategy of playing down the coronavirus despite signs it could further diminish his re-election chances.

Far from being chastened by his bout with COVID-19, Trump has returned to minimizing the danger from a virus that has already killed more than 210,000 fellow Americans, calling on supporters to be “not afraid of Covid” and “get out there.”

In doing so, the president passed up an opportunity to reset his pandemic message and show solidarity with Americans who have suffered. He now risks further alienating the independent and undecided voters – particularly women and seniors – he needs to win on Nov. 3, pollsters and strategists say.

After initially appearing humbled by the positive test that landed him at a military hospital for three nights, Trump quickly flouted health and safety protocols. His drive-by for his supporters on Sunday while still hospitalized, and return to the White House complex on Monday without wearing a mask, stunned doctors and even some Republican allies.

Amy Koch, a Republican strategist in the battleground state of Minnesota, said she was initially encouraged by Trump’s attitude toward his diagnosis.

“But then we had the car ride and the photo op with the mask off in front of the White House. I don’t know what this was,” she said. “I just don’t understand it.”

Trump badly needs something to alter the course of the race. A Reuters/Ipsos poll released on Tuesday shows Biden with a 12-point advantage nationally, and state polls show him leading in Pennsylvania, Michigan and Wisconsin – three Rust Belt states Trump won four years ago in his surprise victory over Hillary Clinton. [nL1N2GX1J1]

The numbers follow a contentious debate with Biden last week that polls show most voters found off-putting. And on Tuesday, Trump denied himself a potential last-minute legislative triumph by halting negotiations with Congress on a new COVID-19 relief bill.

Koch noted that Republican officials seeking reelection or office for the first time who attended a Trump rally in her state last week were now being forced to answer for the president’s behavior.

“This is not what they want to be talking about right now,” she said.

Trump has worked furiously to shift public attention away from his handling of the pandemic. But his recent words and actions have all but ensured that it would remain the primary topic as the election heads into its final stages.

Rather than using his hospitalization as a means to empathize with COVID victims, Trump, 74, seemed intent on a show of strength, with his return via helicopter to the White House on Monday framed as a general coming home from battle.

Sarah Longwell, a Republican pollster who conducts focus groups with swing-state women, said that likely would not impress voters who believe in taking precautions against the virus.

“Seniors in key swing states, women — none of those theatrics appeal to those groups of people,” she said. “These women are not looking at him landing in a chopper and giving a tough-guy speech and thinking that makes their lives any better.” According to Reuters/Ipsos polling, a bipartisan majority of Americans have consistently said they were concerned about the spread of the coronavirus, even as the infection rate dropped in some parts of the country and states reopened businesses and schools.

The latest Oct. 2-6 poll found that 79% of US adults, including 94% of registered Democrats and 70% of registered Republicans, said they are “very” or “somewhat” concerned about the spread of the virus. Just 38% said they approved of Trump’s handling of the crisis, and 56% said they disapproved.

Trump must also worry about money. He has been significantly trailing Biden in fundraising, which has helped the Democrat finance last-minute advertising.

Dan Eberhart, a GOP fundraiser and Trump supporter, called Trump’s post-debate take “anemic” and said his COVID-19 infection will exacerbate the situation by keeping him off the circuit.

“Trump is a high-energy president with a giant personality. Without his persona, the campaign is missing its energy source to run its (get-out-the-vote efforts) and cash machine,” Eberhart said.

Some Republicans defended Trump’s attitude toward the virus.

Lee Snover, the head of the Republican Party in Northampton, a bellwether county north of Philadelphia, lost her father to COVID-19, while her brother and mother contracted it and were forced into intensive care. Nevertheless, Snover said she appreciated how Trump has handled his diagnosis.

“We can’t live in fear. I liked his hope and optimism. That’s his style. I may have done it differently, but that’s him,” she said.

Snover remains in the minority, however. With fears of a coronavirus spike as the weather turns cold, Trump may have made a crucial misstep, said Doug Heye, a former Republican National Committee official.

“After 210,000 deaths, the president hasn’t learned anything,” Heye said. “There is no level where this makes sense.”