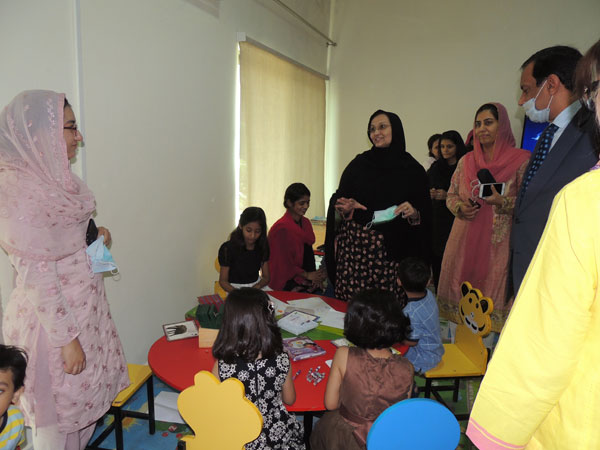 The efforts of Director General (DG), National Accountability Bureau (NAB), Lahore and assistance of Punjab Day Care Association have come up in terms of completion of Day Care Centre at NAB Lahore which was inaugurated by Provincial Minister for Women Development Ashifa Riaz Fityana on Tuesday.

It has been stressed that the basis purpose for establishment of Day Care Centers is to facilitate the working women so they may perform their professional duties as per merits and full dedication, whereas, keeping in view the above, DG NAB Lahore has attempted to facilitate NAB Lahore’s female Officers and officials to acquire benefit of facilitation of Day Care Centre at NAB Lahore which comprises over four (4) Rooms, one kitchen, two bath rooms and a main Hall which is made fully furnished according to the needs and requirements of children. Well educated and experienced staff is hired for Day Care Centre who would look after children of female officers and officials during their duty hours.

At the occasion, the Provincial Minister Ashifa Riaz Fityana appreciated the efforts of DG NAB Lahore for recognizing the importance and needs of working women by establishing a dedicated Day Care Centre at NAB Lahore and also stated that these centers are not less than blessings for working women. She said, being a working woman she knows the very importance of such ‘Day Care Centres’ for them, whereas, Government is also paying particular focus over the affair and providing resources for establishment of Day Care Centers at maximum level.