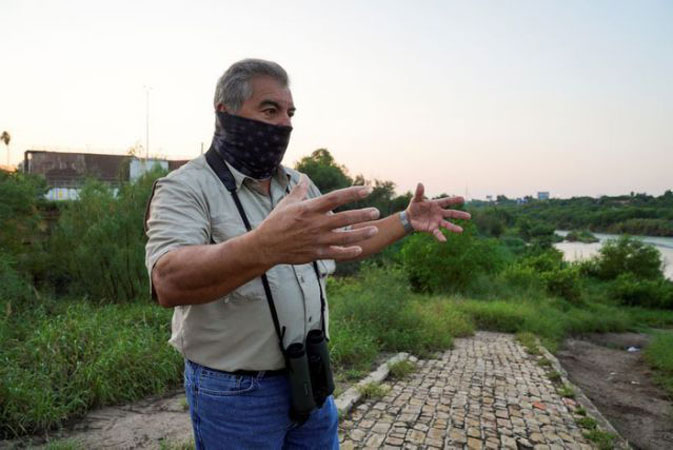 Former US Border Patrol agent Daniel Perales spent hours over the years crouched at the mouth of the Zacata Creek, a tributary of the Rio Grande, listening for the snap of carrizo cane as border crossers from Mexico arrived on the northern banks.

These days, he listens for the whistle of the Morelet’s seedeater, a bird rare in these parts, and frets about the proposed construction of a border wall here.

“It would fragment the habitat of the birds, especially those that live along the river,” said Perales, who spent nearly 30 years with the federal agency and oversaw 400 agents at the Laredo North Station before retiring in 2007.

Perales said he voted for President Donald Trump in 2016 and plans to do so again. But that hasn’t stopped him from joining the ranks of residents in Laredo opposed to building a barrier here as part of Trump’s promised wall spanning the US-Mexico border.

“It’s not necessary. You don’t need a wall here,” said Perales, adding that cameras and patrol roads were sufficient.

Less than a month before the US presidential election, resistance to the wall, a centerpiece of Trump’s 2016 campaign, is flaring across parts of the approximately 2,000-mile border. Near construction sites in Arizona and California in recent weeks, members of Native American tribes have clashed with law enforcement and others over plans for building on lands the tribes consider sacred. Two weeks ago in front of a Laredo courthouse, military veterans against the border project mobilized to thwart a caravan of Trump supporters who had sought to drive over a 30-foot “Defund the Wall” street mural. Amid an election upended by Trump’s positive coronavirus diagnosis, the future of the wall hangs in the balance. Trump’s Democratic challenger, former vice president Joe Biden, has said he would not build “another foot of wall” if elected.

Meanwhile, opposition to plans for a stretch of wall in the counties of Zapata and Webb, which includes Laredo, has united some strange bedfellows: the street artists, multimillionaire Republicans, Catholic nuns, military and border patrol veterans, conservationists and a local Native American tribe.

In Webb County, CBP has issued contracts worth $1.05 billion to three construction companies to build approximately 69 miles of a 30-foot steel bollard wall, as well as construct roads and adding cameras and other surveillance technology.

Construction is slated to begin as early as January depending on the availability of land.

In an August press release, CBP officials said the Laredo wall is necessary to “impede and deny illegal border crossings and the drug and human smuggling activities of transnational criminal organizations.” In the Laredo sector, traffic has not abated during the coronavirus pandemic as it has in other sectors, government data show. In statements to Reuters, CBP spokesman Matthew Dyman said the agency is committed to protecting cultural and natural resources, such as wildlife corridors and culturally sensitive Native American artifacts or sites.

The agency is now surveying land for possible purchase. Dyman said it is “always CBP’s preference” to obtain land voluntarily through negotiated offers but if that is not possible, a condemnation action – known as eminent domain – may be required.

The majority of Americans oppose a substantial expansion of the border wall, according to a January 2019 Pew research poll, although the opinions tended to fall along party lines, with 82% of Republicans in favor and 93% of Democrats opposed.

Opposition in Laredo, which is predominantly Democrat but contains a substantial Republican contingent, appears more lopsided. More than two dozen cities, counties, and Native American tribes in the border region have passed resolutions opposing the project, including Laredo in 2017.

A city of 262,000, Laredo sits in a former Spanish colony and Mexican territory, hugging the Rio Grande River. Here, partisan political divisions quickly evaporate when it comes to deciding on boundaries and the fate of the land.

Webb County is 95% Hispanic and many residents have family connections to Mexico. Business owners depend on cross-border trade. Some ranchers trace their property rights back to the 18th century Spanish land grants. The ancestors of the Carrizo/Comecrudo Tribe of Texas formed their ties to the territory well before then.

In 1840, Laredo was the seat of the short-lived Republic of the Rio Grande, whose independence from Mexico lasted for 10 months before its cavalry was crushed by that country’s Army.

“We’ve declared independence before – and we could do it again,” said Margarita Araiza, executive director of the Webb County Heritage Foundation who traces her family’s roots in Laredo back twelve generations to that 19th-century rebellion.

She worried the wall’s construction could destroy or destabilize the city’s 250-year-old historic sandstone buildings and sever its cozy relationship to the Rio Grande, where residents often fish, picnic, and stroll.

“This is the reason this city was created, because of access to the river,” said Araiza.

CBP spokesman Dyman said that no historic buildings would be directly affected by border wall construction based on current plans.

Araiza is one of the founding members of the Laredo No Border Wall Coalition, a loosely organized group that seeks to halt the project.

Working with a coalition of concerned landowners is the Laredo-based IBC Bank, whose chief executive officer, Dennis Nixon, was a top Trump donor in 2016. The proposed barrier could cut through the bank’s 75 acres of waterfront property.

“At a time when (America´s) number one trading partner is Mexico, what is the message we are sending to our friends in Mexico?” said Gerardo Schwebel, executive vice president of the bank’s corporate international division.

Not everyone in the city is opposed to the barrier. Supporters say the Mexican town of Nuevo Laredo, just across the river, is a hub for drug trafficking and human smuggling.

“No one wants to build a wall around their homes if they don’t have to, but there’s a need for that security,” said Hector Garza, president of the National Border Patrol Council’s local union chapter.

The proposed border wall in Texas primarily cuts through private land, generating opposition and some alliances among occupants and landowners large and small.

Felipe Antonio Perez, a 92-year-old retired carpenter, said he’d lived in his modest wooden house near the river bank in Laredo’s historic La Azteca neighborhood for over sixty years. Standing beside a “No Border Wall” sign on his fence, he told Reuters he’d thrown away a government inquiry about surveying his land.

The oil-rich Fasken family, one of the top-fifty largest landowners in the United States with 85,000 acres in Webb County alone, co-founded the Rio Grande Landowners’ Coalition to stop the wall project.

“We feel there is a better way to secure the border and that putting up a 30-foot high wall to make a political statement is not the best use of taxpayers’ money,” said Bill Skeen, the family’s real estate manager.

Also opposed are the sisters of the century-old Sacred Heart Children’s Home for orphans, which overlooks the river. “Put yourself in the place of an individual who has been orphaned – abandoned, abused, or whose parents have died — the land and its natural beauty and its view becomes your refuge,” said Beto Cardenas, the attorney representing the sisters in their negotiations with the government.

The ancestral territory of the Carrizo/Comecrudo Tribe of Texas extends on both sides of the river, said Chairman Juan Mancias as he surveyed riverside willow trees that the tribe uses to build sweat lodges on ranch land outside Laredo. Native burial grounds lie along the river, he said.

“The wall is a racial attack on our identity as people of the land,” he said.

He said the tribe does not own riverfront land – it “owns us.” But his people are committed to protecting it. “My great grandchildren would be denied this,” he said, looking across the landscape dotted with mesquite trees and purple sage. “They would be denied who they are.”