No anti-state agenda to be allowed: Ijaz Shah 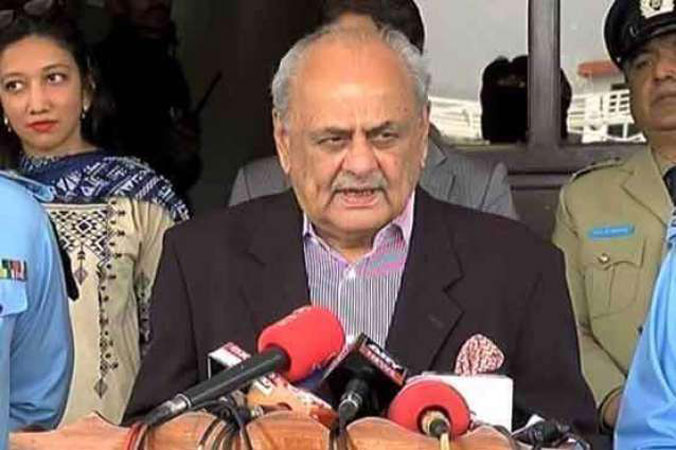 Federal Minister for Interior, Brig (R) Ijaz Ahmad Shah has said that the state will not allow any anti-state agenda.

He was of the view that these rallies to be held across Pakistan by opposition should not be allowed, said a press release issued on Sunday. Ijaz Ahmad Shah said that Nawaz Sharif who fled to London seeking humanitarian assistance and health issues was now seeking refuge in anti-state agenda.

“Now that Nawaz knows that he has to either pay back the money or face the court, he has started undermining country’s institutions”, he said.

“Prime Minister Imran Khan announced in his initial speeches of 2018 that if any of the parties think that elections were rigged they should identify the seats to be re-examined, which they did not do and have now started hue and cry” said Ijaz Shah.

He further said that the state was not so weak that it would succumb to the pressure of the ones who had looted the country for years and now were afraid of facing the reality. “No democracy in the world maligns its own Institutions” he added.

The Interior Minister was of the view that these rallies had nothing to do with the betterment of Pakistan or democratic practices but were solely planned around anti state agenda to create disruption across the country and gave room to the external elements to find grounds to damage the country. In this perspective, he was of the view that opposition was holding the rallies under “pretext” of democracy and were by no means in country’s favor. In my view they should not be allowed to hold these rallies, he said. “The country’s honor and the dignity of its institutions were to be maintained and protected by all means,” he said.

“Seventy percent of PML-N members are not standing by Nawaz Sharif and Maryam Nawaz’s [narrative] of targeting state institutions,” Fawad said while addressing a press conference in Karachi.

Fawad Chaudhry said that Nawaz Sharif is criticising state institutions just to protect his looted money. He said that the former prime minister has been visiting restaurants regularly in London and he should return back to Pakistan morally.

“Government is trying to bring back Nawaz Sharif,” he said and added that it would be easier for the incumbent in bringing Nawaz back to Pakistan as “he is a culprit”.

He urged the PML-N leadership to refrain from targeting state institutions, saying that it is against the national interest.

Commenting over PML-N disgruntled MPAs, Fawad claimed, “More disgruntled PML-N MPAs are in contact with the PTI leadership, who will reject the narrative of Nawaz Sharif and join the PTI soon.”

Commenting on the PDM, the federal minister said the movement’s only objective is to spread chaos in the country.

The PTI minister advised opposition parties to hold their rallies in marriage halls as they have been failed totally in gathering public.

On the other hand, Minister for Planning, Development and Special Initiative Asad Umar on Sunday said that the opposition was trying to seek NRO on roads after failure to get it from the parliament.

“After passage of Financial Action Task Force (FATF) related bills from the parliament, they (opposition parties) got disappointed as their hopes of getting NRO from the assemblies have died,” he said in his tweet.

The minister said it seemed some new elections were held in last one month as all of a sudden, the opposition decided to get on roads against the alleged rigging in elections. He said in fact the opposition was trying to pressurize the government to get some relief. “Now they (opposition) have come to the conclusion that there is no chance of NRO in assemblies, therefor they are now trying to search it on roads,” he remarked.