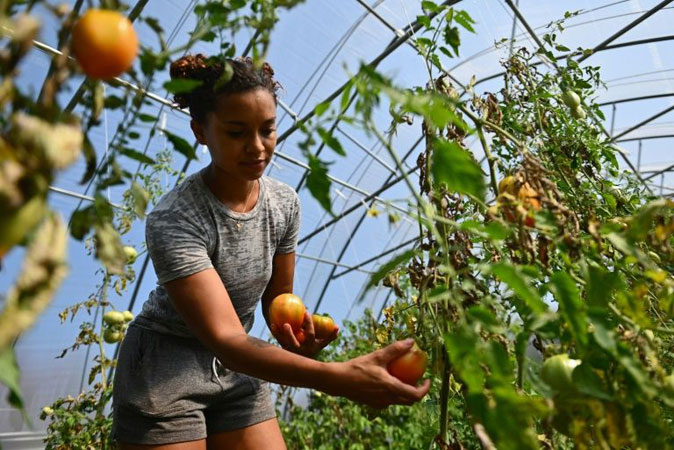 In the sweltering heat of a greenhouse, Brooke Bridges inspects long rows of tomato plants, pleased to see a bountiful harvest growing. Once ripe, the crop will be picked and packed, then delivered mainly to poor Black and minority families around Albany, the capital of New York state.

“A beautiful box of produce can spark something in them and remind them of who they are as a Black person in America,” said the 29-year-old Bridges, who gave up an acting career in California to move to the New York countryside.

This young Black woman is one of seven employees working for Soul Fire Farm, which calls itself a “BIPoC-centered community farm” — the acronym standing for Black, Indigenous and People of Color.

The 80-acre (32-hectare) farm was founded in 2011 by an African-American activist, Leah Penniman, and her husband Jonah Vitale-Wolff. It specializes in medicinal herbs, such as mint, bee balm, St. John’s wort and calendula, and vegetables, with the goal of helping fight racial injustice.

That cause gained urgency and became a focus of the presidential election campaign after nationwide protests that followed the death in May of the African-American George Floyd, who was asphyxiated under the knee of a white police officer.

While the Black Lives Matter movement has drawn attention to police violence and racism in American cities, racial injustice in the farming sector remains less well-known.

Blacks are clearly under-represented on US farms. There are only 45,000 Black farmers — 1.3 percent of all agricultural producers. Black people are about 13 percent of the population, according to census data.

And yet, a century ago nearly 15 percent of American farmers were black, reflecting reforms that followed the end of slavery in the 1860s.

But during the 20th century, racial segregation, discriminatory Jim Crow laws and the many obstacles to farm ownership forced many Black people to leave the rural South in search of work — often in factories — in the North.

One of the most common discriminatory practices was that of “redlining” — refusing credit to poor people, many of them Black, living in certain defined areas.

It remains difficult even today for African-Americans in many parts of the country to obtain the bank loans they need to buy and develop a farm.

“We all realize that while we don’t have a physical knee on our neck, Black farmers have had an economic knee on their neck since the end of slavery,” said Dewayne Goldmon, executive director of the National Black Growers Council, a group advocating for black farmers.

“What makes it worse in rural America, and certainly in the farming community, is that that knee that was on the neck of my grandfather still impacts me today,” said Goldmon, who runs a family farm in Arkansas.

Adding to the economic inequities are persistent prejudices.

Justin Butts, who is in charge of sheep, pigs and fowl at Soul Fire Farm, faced the skepticism of white colleagues in Pennsylvania when he took up farming.

“Other farmers didn’t believe that I was a farmer and was legitimate,” said Butts, a former naval officer. “Or they would tell me that Black people don’t farm — when I was a young person just beginning the farm. And it was very insulting.”

The issue has drawn little political attention, though Democratic presidential candidate Joe Biden has promised to support the rights of indigenous farmers and those of color.

As they work to build a healthier relationship to the earth, the members of Soul Fire Farm have embraced farming traditions used by their ancestors — techniques like no-till farming, intercropping and mulching.