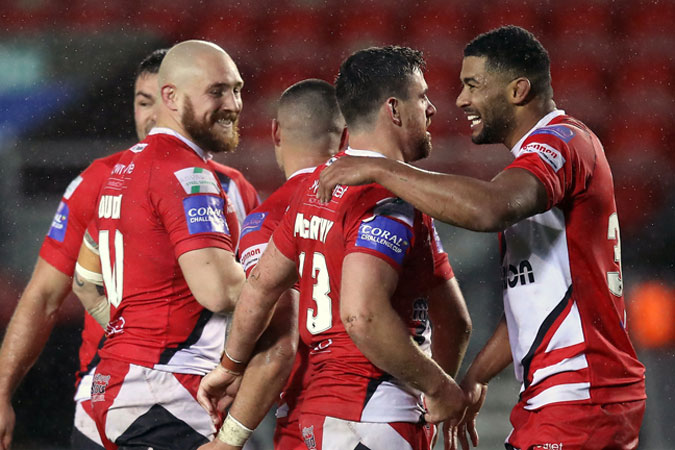 Salford are through to their first Challenge Cup final for 51 years after edging out holders Warrington 24-22 in a thrilling semi-final at St Helens. Twelve months after reaching their maiden Super League Grand Final, the Red Devils will play Leeds at Wembley on October 17 seeking to lift the trophy for the first time since their only previous success in 1938.

Warrington will be kicking themselves after leading for most of the game but these are heady days for Ian Watson’s men, who demonstrated their never-say-die quality for the second time in five days.

They came from 18-0 down to beat the Wolves in Super League in midweek with a penalty two minutes from the end by Krisnan Inu, who was also their hero at the Totally Wicked Stadium as he converted a try from hooker Joey Lussick with six minutes to go.

Yet it began so badly for Salford, who had second rower Tyrone McCarthy sin-binned for a dangerous tackle on Stefan Ratchford after 10 minutes.

The Wolves immediately went in front as centre Toby King took full advantage of both his side’s numerical advantage and the wet conditions as he slid over for the opening try.

Ratchford, on his 250th appearance for the club, kicked the conversion and added a penalty seven minutes later to put his side into a deserved 8-0 lead.

The Red Devils were slow to get into their stride but experienced half-backs Tui Lolohea and Kevin Brown gradually worked their way into the contest and they struck back midway through the first half.

Warrington full-back Matty Ashton was deceived by the bounce on the greasy surface as he attempted to clear the danger caused by a kick from Lolohea and England centre Kallum Watkins pounced for his first try for the club.

Inu added the conversion and Salford would no doubt have been content to turn around only two points in arrears but Warrington stand-off Blake Austin had other ideas.

His towering kick was fumbled by full-back Dan Sarginson, who had over-turned a two-match ban to take his place in the Salford team, and the Great Britain playmaker made the most of the position to jink his way through the Red Devils defence for a solo try.

With Ratchford forced out of the action, Gareth Widdop took over the goalkicking duties and converted the try with the 500th goal of his career.

That made it 14-6 but Inu pulled two points back with a penalty just before the break and he cut the gap further within 90 seconds of the second half by leaping above Anthony Gelling to collect Brown’s pinpoint kick to the line for his side’s second try.

Inu could have levelled the scores but his conversion attempt was off target and Warrington edged further in front with a Widdop penalty.

The game looked to move out of Salford’s reach on the hour when Sarginson fumbled a kick from Austin and two plays later burly substitute forward Ben Murdoch-Masila took a short pass from dummy half Daryl Clark to crash over for a try.

Widdop’s third goal opened up a 10-point lead but Salford were full of fight and second rower James Greenwood won the race to Brown’s kick on the last tackle to score their third try.

Inu’s conversion cut the deficit to 24-20 and the scores were level six minutes from the end when Lussick burrowed his way over from dummy half for the most important try of his career.

Inu was left with a simple conversion to put his side in front for the first time and he made no mistake.