‘Bottom-feeding’ Marlins are making a splash in playoffs 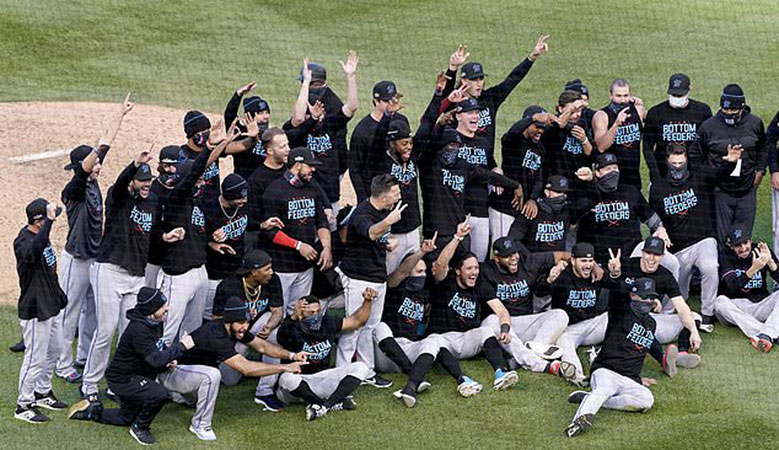 MIAMI: Their T-shirts say Bottom Feeders, even though the Miami Marlins are showing they´re a different kind of fish in 2020 – the sort that rises to make a splash.

Surprising Miami has advanced to MLB’s final eight, disproving disparaging adjectives so often applied to the long-suffering franchise by detractors. That includes Ricky Bottalico, the former All-Star reliever and current Philadelphia Phillies’ broadcaster who described the Marlins early in the season as “bottom feeders.”

“Everybody thought that about Marlins — they were a team you should beat up on,” Bottalico said in a phone interview Saturday. “And they proved everybody wrong. Good for them.”

Instead, the Marlins made the playoffs for the first time since 2003, swept the Chicago Cubs in this week’s wild-card round, and advanced to the best-of-five NL Division Series to face the Atlanta Braves beginning Tuesday in Houston.

Don’t count them out: This is a franchise that tends to be an also-ran in the summer but dominant in October, with a 7-0 record in postseason series. That includes World Series titles in 1997 and 2003.

After holding the Cubs to one run and nine hits in two games, the Marlins posed for a team photo in the Wrigley Field infield. A few players wore masks, the rest wore grins, and all wore Bottom Feeders T-shirts.

“It’s a mindset,” said first baseman Garrett Cooper, who hit a pivotal homer in Thursday’s 2-0 win. “You take that to heart and you try to stick it to everybody, because we don´t get the respect we think we deserve. It´s a great mantra, because it shows everybody is riding on the same train.”

Bottalico, who pitched 12 years in the majors, said he’s shocked to see the Marlins literally wearing his words, but salutes them for finding motivation wherever they could.

“I’m not mad about it,” he said. “You’ve got to give them a lot of credit. Nobody – nobody – was thinking they were going to play as well as they did.”

By bouncing back from a 105-loss year in 2019, and then from a coronavirus outbreak in July that sidelined more than half the team, Derek Jeter’s Marlins have earned some respect. Nonetheless, they’re the biggest underdogs in next week’s round, partly because Miami has been Atlanta’s perennial punching bag in the NL East.

Miami won four of 10 games against the high-scoring Braves this year.

“They´ve run this division for a few years now,” Cooper said. “They have that offense, and some good pitching. But anything can happen. They know us; we know them.”

“He has incredible stuff, and that gives him the confidence to go out there and compete,” teammate Matt Joyce said. “He’s not scared. He’s really poised for his age. He really went at those guys.”

Sandy Alcantara was just as good in Game 1 against the Cubs, allowing one run in 6 2/3 innings. Pablo Lopez and Trevor Rogers give Mattingly two other well-rested, hard-throwing options to start against Atlanta.

“We like the power,” Mattingly said. “I’ve been watching the playoff games, and it seems like a lot of games are just bullpen games. We´re a little different. We trust our starters, every guy that goes out there usually has better stuff than anybody we´ve got in the pen. “So you trust those guys to go a little ways. They are young and inexperienced, but it’s just baseball.” And the Marlins are getting better at it.