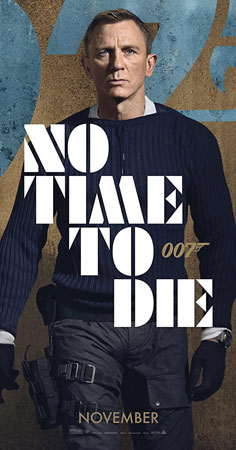 The release of the James Bond film No Time To Die has been delayed again, this time to 2021, because of the effects of COVID-19 on the theatrical business. MGM, Universal and Bond producers, Michael G. Wilson and Barbara Broccoli, said on Twitter Friday that the 25th installment in the franchise will now open globally on April 2, 2021. No Time To Die was originally supposed to open in April 2020 but was pushed back to November 12 in the U.K. and November 20 in the U.S. It was one of the first Hollywood films to abandon its release before cinemas in the U.S. shut down in mid-March because of the coronavirus pandemic. The film from director Cary Joji Fukunaga stars Daniel Craig as 007, Rami Malek, Lashana Lynch and Ana de Armas. In a related move, Universal moved its F9, the ninth installment of the Fast & Furious franchise starring Vin Diesel to May 28. Its previous April 2 release date would have put it in direct competition with Bond. Other major studios have made similar decisions over the past few weeks. Cinemas remain closed in New York and Los Angeles, two of North America’s biggest markets. Ticket sales for Warner Bros.’ Tenet, the first blockbuster to open in theaters worldwide after months of coronavirus-related closures, have not been as strong as hoped for in the U.S. The Walt Disney Co. last week delayed the planned 2020 releases of a handful of major movies until 2021.