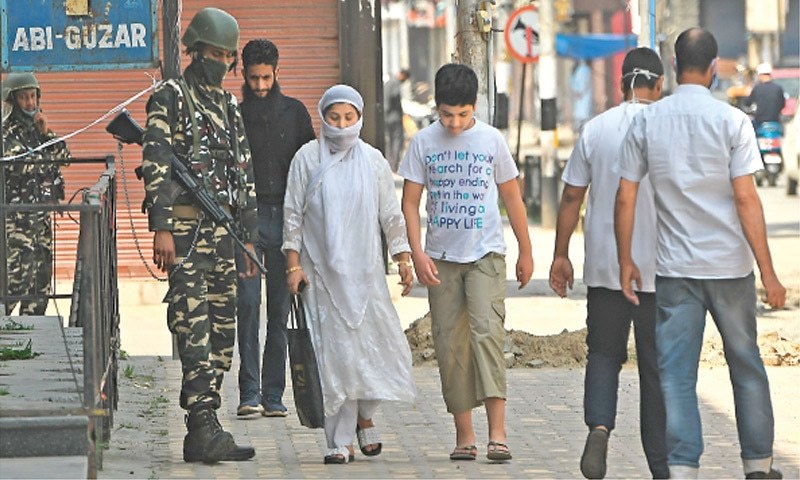 SRINAGAR: Government investigators on Saturday exhumed the bodies of three young men in occupied Kashmir, two weeks after the Indian military in a rare admission said its soldiers exceeded their legal powers in killing the men they wrongly described as “Pakistani terrorists”.

A team of police and medical officials exhumed the bodies of three men in western Baramulla district and handed them over to their families for burial at their remote village in southern Rajouri district, police said.

Mohammed Yousuf, the father of one of the victims, said the three were murdered in cold blood.

“Our sons have been proved innocent and we are now waiting for justice,” Yousuf said. “The killers must face justice.”

Police, however, later buried the bodies in a remote cemetery in Baramulla.

About a month later, three families in Rajouri identified the victims as their missing relatives using photographs of the bodies that circulated on social media. The families filed a complaint with police, accusing soldiers of killing their relatives in a staged gunfight.

The families said the three men went to Shopian to work as labourers and were last heard from on July 17.

Police ordered an investigation, the results of which have yet to be released.

On Sept 18, the Indian military admitted wrongdoing and said its internal probe identified the three men killed as local residents, without explaining how the military had identified them. It also said an army investigation showed the soldiers had exceeded the powers granted to them under the Armed Forces Special Powers Act.

The act gives the Indian military in Occupied Kashmir sweeping powers to search, seize and even shoot suspects on sight without fear of prosecution. Under the act, local authorities need federal approval to prosecute army or paramilitary soldiers in civilian courts.

The special powers were given to the military in 1990, a year after an armed rebellion erupted in Occupied Kashmir seeking the Himalayan region’s independence or merger with Pakistan. Kashmiri civilians and activists for years have accused Indian troops of abusing their powers and repeatedly targeting civilians.

In 2000, the Indian army killed five men it alleged were militants responsible for the massacre of 35 Sikhs in the disputed territories. An investigation later found the five were local villagers killed in a faked firefight.

In 2010, a massive uprising erupted in Occupied Kashmir after a police investigation found Indian soldiers had killed three civilians in a staged gun battle and then said the victims were militants in order to claim a reward for killing them. The army responded by suspending two officers.

India has rejected every request since 1989 to prosecute Indian soldiers in civilian courts for alleged human rights abuses including murder and rape, according to official documents.