How US Justice Department disarmed its police reform effort 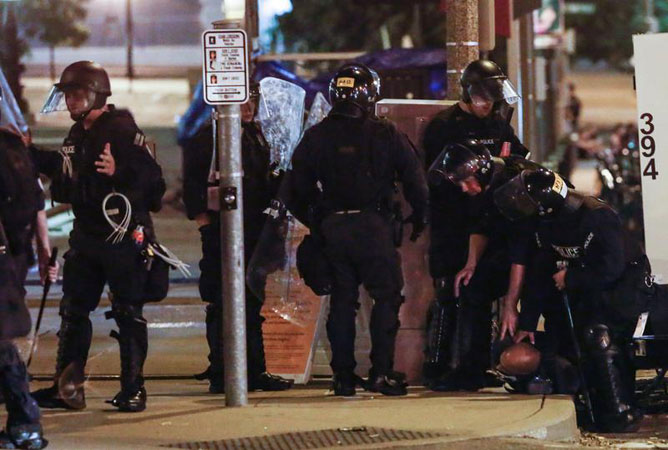 In 2017, a white St. Louis policeman was acquitted of murdering a Black man. The verdict sparked days of protests and clashes with police. Before shifts that week, two officers texted colleagues, expressing excitement.

“Let’s whoop some ass,” officer Christopher Myers wrote, according to texts obtained by federal agents. Later, he added: “The bosses are being a little more lenient with the use of force by us.”

“The more the merrier!!!” officer Dustin Boone wrote. “It’s going to be fun beating the hell out of these shitheads once the sun goes down and nobody can tell us apart … Just fuck people up when they don’t act right!”

On the third night of protests, the two officers confronted a middle-aged Black protester named Luther Hall. Hall later told authorities his hands were raised when someone grabbed him from behind and slammed him into the ground face first. Then, Hall said, he was struck by police batons and boots. He required spinal surgery and for weeks struggled to eat through a bruised jaw.

The alleged beating was not captured on video. But the accuser made an excellent witness: Hall was an undercover cop, posing as a demonstrator.

The alleged misconduct by police at the 2017 clashes triggered criminal charges against these and other officers. Myers and Boone have pleaded not guilty to criminal civil-rights violations.

For many residents the charges were not enough. They also called for a sweeping review of racial and other problems within the St. Louis department, a so-called “pattern or practice” investigation, a powerful federal tool to address systematic police abuses. The probes enable the Justice Department to sue a police force and compel it to clean up abusive practices.