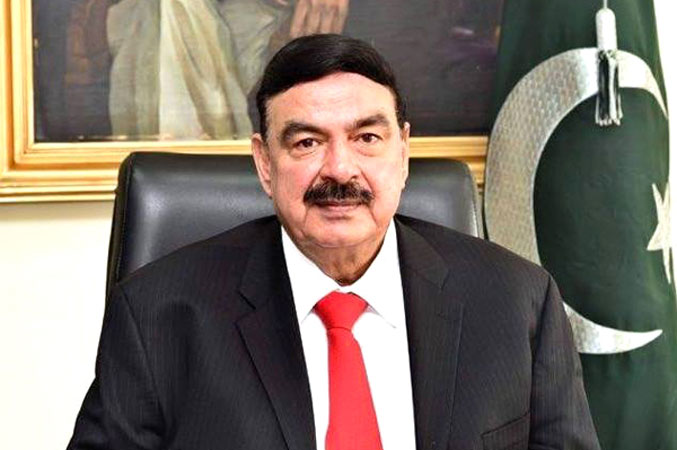 Minister for Railways Sheikh Rashid Ahmed said on Saturday that it was ‘wrong’ of Prime Minister Imran Khan to allow the airing of Nawaz Sharif’s speeches.

He said that PML-N leadership was afraid of expected Pakistan Tehrik-e-Insaaf (PTI’s) majority in the coming senate elections. He asked 30 questions from the PML-N and Pakistan Democratic Movement. He said that Nawaz Sharif did not have trust in any other leader of his party so he wanted to keep party leadership in his own hands or within his own family, adding that he would never give leadership to Shahid Khaqan Abbasi or Khawaja Asif like senior party leaders.

He questioned that why Nawaz in his letter appreciated former general Zahirul Islam for his services four years ago and now he was talking about the retired general. He insisted that the PML-N would soon split and political sweeping was expected in the month of December or January.

The minister said that PML-N leaders now talked against the courts as there was no Justice A Qayyum, Justice Naseem Shah or Justice Tarar.

He alleged that Nawaz deceived former prime minister M Khan Junejo and supported in toppling his government but now he (Nawaz) was screaming when the same was happened to him.

Sheikh Rashid said that Maryam Safdar being a woman was enjoying some facilities but these concessions would at last be terminated.

He asked Maryam to inform the people about reason behind the arrest of his uncle Shehbaz Sharif and cancellation of his bail.

He questioned Maryam why her father did not go to hospital in London and what were the names of those employees who made transactions of Rs 9 billion to her uncle’s account?

“Isn’t it ridiculous that Nawaz was working in the UAE while he was prime minister of Pakistan?” the minister questioned.

He said that no one would talk about any movement if Prime Minister Imran Khan accepted 34 amendments in NAB laws. He said this was the same army which had called Nawaz from Dorchester Hotel and made him minister of Excise and Taxation at that time but now he (Nawaz) was giving statements against the same army.

He said the person who talked against that army which fought against terrorism, locusts, coronavirus, floods, Polio, and for Neelum Jehlum, ML-1 and CPEC projects, would not be spared.

The minister said these looters would have to answer about the looted money before the courts.

“The nation understand why this leader met Modi one on one, why he called Indian prime minister from outside of the country, business with Jandal and why he told address of Ajmal Qassab,” he said.

He said that anti-CPEC elements and enemies of China had launched Nawaz to destabilize the system so that the CPEC project could be damaged.

He said that Maulana Fazlur Rehman declared the assemblies as” Haram” from where he once contested the election of president.

“The nation has yet not forgotten how you attacked the Supreme Court by bringing people in buses,” Sheikh Rashid said. The minister questioned how the Calibiri font was available one year earlier to Maryam?

“Who planned throwing stones at the NAB office and who instructed from London?” he questioned.

He asked who managed character assassination of Benazir Bhutto with the fake signatures of Petter Galbraith by Hussain Haqqani. Sh Rashid said who manged election funds from Qatar and other countries through Saifur Rehman in 2013?

“How many meetings were made with Usama Bin Laden and how much money was received from him on the name of Islam,” he asked. “Wasn’t it freedom of media that an absconder and criminal person was allowed to be covered by the channels,” the minister questioned.