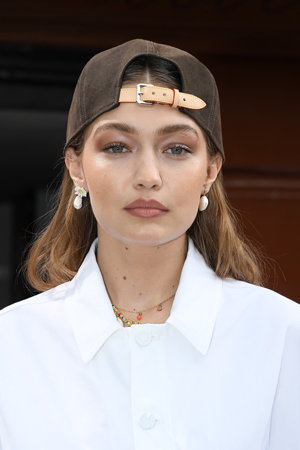 Gigi Hadid has been receiving an abundance of gifts by her friends ever since she gave birth to her little angel. The supermodel, who welcomed her first child with Zayn Malik last month, debuted a sparkling new ‘mama’ necklace recently.

The sparkling diamond-covered necklace is doing the rounds on the internet wowing fans from all around.

As reported by Page Six, the necklace is a gift from jewelry designer Jacquie Aiche, whose jewels are adored by the likes of celebs like Vanessa Hudgens, Alessandra Ambrosio and Sofia Richie along with the Hadids.

Ever since giving birth, Gigi has received a horde of gifts from her friends in the entertainment and fashion industry.

Apart from the handmade blanket gifted to her by Donatella Versace and Taylor Swift, she was sent flowers by Tommy Hilfiger, Kendall Jenner and others.

Gigi announced the birth of her daughter last week.

Sources revealed she welcomed her baby girl on September 19 at her family’s farm in rural Pennsylvania.