Jobs hemorrhaging persists even as US economy recovers 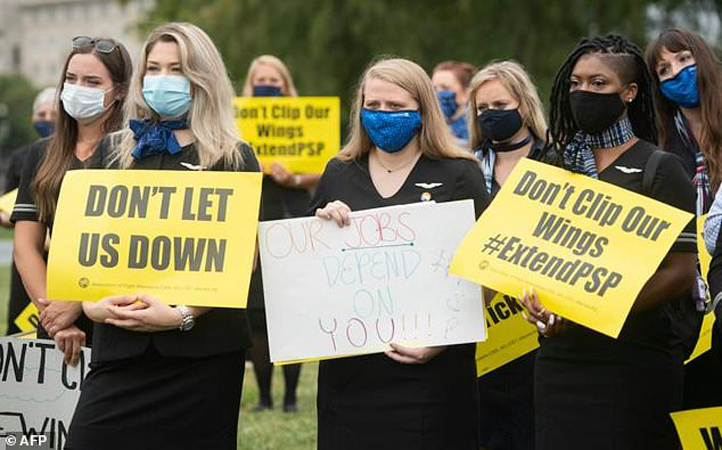 Flight attendant Kristine Lambiris kept working after her husband lost his job when the coronavirus shut businesses across the United States, but as of Thursday evening she has now been furloughed herself.

“We’re both pretty scared,” said Lambiris, a United Airlines employee and member of the Association of Flight Attendants trade union. “I don’t want to have to be on unemployment and I don’t want to be taking money away from other people.”

This week’s expiration of job-saving federal aid to airlines has set the stage for another round of mass layoffs in the world’s largest economy, where Covid-19 has already caused tens of millions of people to lose their work.

Yet a Labor Department survey due to be released Friday is expected to show the economy adding 800,000 jobs in September, with the unemployment rate declining to 8.2 percent, though it will be based on data taken prior to this week’s cuts.

The report will be the last before President Donald Trump faces off with his Democratic challenger Joe Biden in the November elections, and comes as the US economy finds itself at a crossroads six months into the pandemic.

Key sectors have begun recovering from the coronavirus shock even as layoffs remain commonplace, but with lawmakers in Washington deadlocked on additional stimulus spending, the question now is whether that progress can be sustained.

“Even without stimulus, we could eke out gains that are better than people expect,” corporate economist Robert Frick at Navy Federal Credit Union said of the employment report. “But we don’t want to eke.”

Bounce back or grind on?

The business shutdowns beginning in March to stop the spread of Covid-19 sent the unemployment rate to 14.7 percent in April, though it has since decreased.

Congress’s passage of the $2.2 trillion CARES Act in March has been credited with stemming some of the bleeding.

Airlines hit hard by the drop-off in travel demand were given aid in exchange for keeping workers on their payrolls through the end of September.

The CARES Act also supported consumer spending by providing the droves of unemployed workers an extra $600 per week in assistance, a massive financial cushion for lower-paid workers.

“What I was bringing home every two weeks at the zoo, I was getting every week of unemployment,” said Nashawn Cooper, who was let go from his job at the Atlanta zoo as the pandemic struck.

But Congress and the Trump administration couldn’t agree on an extension and the extra payments expired at the end of July, cutting Cooper’s benefits down to just $160 per week — just enough to pay the bills.

Democrats and Republicans have resumed negotiating this week but it was too late for the airlines, which watched the September 30 deadline pass without the aid they’d pleaded for from Congress.

American Airlines has since announced it will furlough 19,000 workers, and United 13,000.

Lambiris, who lives in southern California near Disneyland, expects to have to compete for job openings with some of the 28,000 people Disney said this week it would lay off.

“I don’t think the job will be like anything I want,” she said. “It won’t make up for the salary, for sure.”

Analysts warn the impasse over stimulus will catch up with the US economy eventually.

And the Labor Department data reported 837,000 new claims made for jobless benefits last week, still higher than the worst week of the 2008-2010 global financial crisis.

However Frick said indicators like a surge in applications for new businesses as well as data on restaurant reservations, car sales and travel show that some sectors are recovering, bringing jobs along with them. “One of the things I think forecasters sometimes miss is how innovative the economy is turning out to be,” he said.

The state of Georgia was among the first to reopen its economy after the shutdowns, and Cooper said he’s seen lots of job openings, particularly among retailers.

“I’m not relaxing, I’m not sitting back and saying I don’t have to work,” he said.

Cooper is meeting with a prospective employer next week, but said, “If that doesn’t work out, I’m continuing to look for a job.”