Players can drift away mentally without fans, says Svitolina 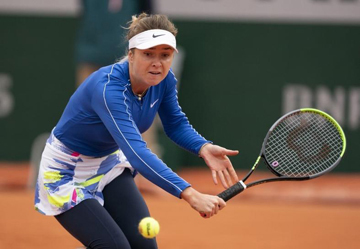 PARIS: Elina Svitolina advanced into the fourth round of the French Open with a solid 6-4 7-5 victory over Russian Ekaterina Alexandrova on Friday, staying focused throughout – a tough ask in the near total absence of fans, she said.

The Ukrainian third seed, who reached the last eight twice at Roland Garros, benefited from the 27th seed’s early string of unforced errors to take the better start as she set up a meeting with Belgian 16th seed Elise Mertens or France’s Caroline Garcia.

“I knew it would be a difficult match, she plays flat and deep,” said Svitolina. “It was very important to stay focused on every point, dig deep, and run for every single ball.”

After the U.S. Open was played without spectators due to the COVID-19 crisis, French Open organisers were forced to gradually lower the number of fans allowed into Roland Garros to 1,000, meaning courts have been mostly empty.

According to Svitolina, players can drift away mentally in such unusual conditions. “Playing at a Grand Slam really makes you feel special, I would say. And to go far in the tournament also it gives you confidence and really enjoyable moments,” she told a news conference.

“But something is missing. For sure it is the fans. I really love to play in front of many people, big stadiums. I think they really push you to play better, to compete better. That’s why I think now these days some players can struggle. They can play really good one set and then go away maybe mentally.”

That’s exactly what happened to Svitolina in her second round match. “You have to expect this can happen. For example, if you look at my second round, I lost the second set like in 10 minutes,” she explained.

There was none of that on Friday for Svitolina, however.

Alexandrova peppered the Suzanne Lenglen court with unforced errors early on, staying in the contest courtesy of a reliable first serve, but the Russian fell one set behind when Svitolina converted her only break point in the 10th game. Svitolina, who geared up for the French Open by winning the title at the Strasbourg International, saved a break point at 5-5 in the second set as the rallies got longer.

Alexandrova eventually paid the price for her effort and bowed out on her service game.

A double fault earned Svitolina two match points and the Ukrainian converted the first when her opponent whacked a forehand long.