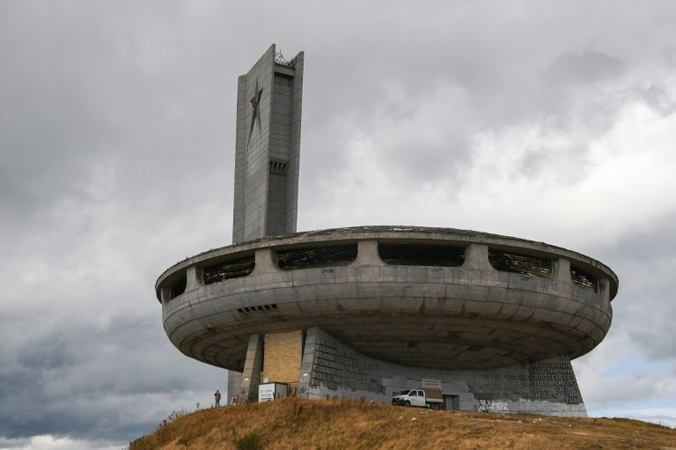 Nestled in Bulgaria’s central Balkan Mountains, an international team of art experts and architects is hard at work trying to preserve one of the country’s most striking monuments, a communist-era “flying saucer” perched on a hillside.

The monument on Buzludzha Peak was dedicated to the glory of communism but since the collapse of that regime, it has fallen into disrepair.

An operation is now underway to save its striking series of mosaics as a debate rages on about the site’s long-term future.

“It’s a race against time,” said architect Dora Ivanova, who launched the campaign to save the monument.

“We have to act fast because there won’t be any mosaics left if we wait for a plan” from the authorities, she told AFP.

Erected in 1981 at an altitude of 1,400 metres (4,600 feet), the monument comprises a circle in concrete and steel alongside two 70-metre-high pillars dominated by a red star.

It contained no fewer than 937 square metres of mosaics, a third of which have already been lost.

Among the panels are depictions of the entry of the Red Army in September 1944 as well as glorifications of workers, peasants and the role of women in socialist society.

A representation of the hammer and sickle emblem still adorns the centre of the ceiling, but parts of the roof around it have fallen in.

The mosaic portrait of former dictator Todor Zhivkov, meanwhile, has been replaced by a scruffy graffiti version.

However, the marble adorning the floor and the walls has survived.

“The aim is not to restore the monument in its old splendour,” said Thomas Danzl from Munich’s Technical University, one of the team working at the monument.

“We will also keep the graffiti as a sign of the current time, of the past 30 years,” he said.

The restoration mission has received a $185,000 (157,000 euros) grant from the American Getty Foundation, enough to focus on conserving the fragile mosaics while gaps in the roof are covered with wood and sheet metal to protect them from the elements.

In total 18 experts and students from Germany, Switzerland, Greece and Bulgaria are working on the project.

Danzl says that the works in the monument show traces of Byzantine tradition but also material and technique that attests to their own time.

“We are working on the critical areas while using the least invasive materials possible” for the mosaics while the authorities come up with a plan for the rest of the site, said the technical head of the team, Nikifor Haralampiev from Sofia’s Academy of Fine Arts.

The authorities have dragged their feet in awarding Buzludzha the status of an official cultural site, which would unlock further funds for its restoration.

They are mindful of how the site, and its role as an emblem of a dictatorship, divides opinion.

A monument to the Soviet Army in central Sofia is for example frequently covered in graffiti and critical slogans.

“It’s society as a whole which has to decide on the function of this monument,” said the president of the regional council Gergana Mihova, as austere mosaics of Marx, Engels and Lenin stare down at her.

She carefully avoided expressing a view as she admitted that there “have always been voices for and against”.

In Kazanlak, a town at the foot of Buzludzha mountain, 52-year-old teacher Stoyanka Dimova said she has her doubts about saving the monument.

“This money from abroad should first help the people, it’s the poorest country in the European Union,” she said.

Haralampiev — who was born the same year the monument went up — said it’s “an exceptional work of architecture” and while he “understands the reasons of those who want to destroy it, it’s not the right approach”.

Ivanova, who launched the campaign to save the monument, admits that the monument was used by the communist regime as an instrument of propaganda, for example by organising group visits to the site.

Her own proposal is to make the site relevant to the modern era by using it to commemorate all of Bulgarian history, but it remains to be seen if this will be realised.

For Danzl, “preserving the mosaics is preserving a sort of memory”. “You have to know the past in order to have a better future,” he said.