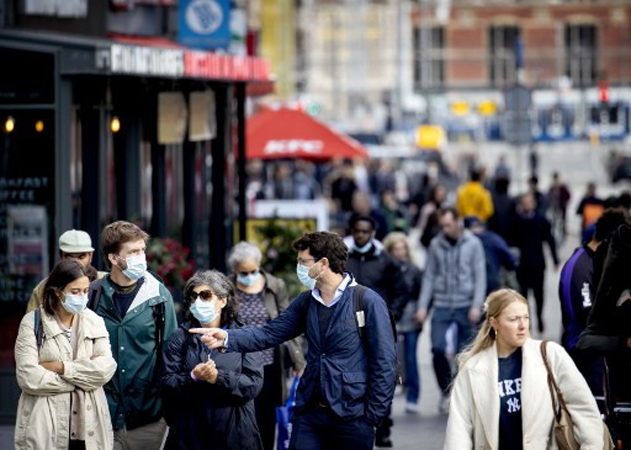 A rare sight has begun to appear in Dutch cities: people wearing masks.

Since the start of the coronavirus pandemic, the famously liberal Netherlands has held out against the strict measures imposed by its European neighbours.

But with the country gripped by a second wave of infections, the Dutch government has made an abrupt U-turn, advising people to wear face coverings in all indoor spaces.

Prime Minister Mark Rutte this week “urgently recommended” that masks be worn in supermarkets, museums and railway stations. “I find it uncomfortable, but I’m wearing one because I don’t want to be quarantined,” teacher Maria Houweling said in one of The Hague’s main shopping streets.

Houweling, 48, said she thought mask-wearing should to be compulsory as it is in many countries including France, Spain and Italy. That is a step the Dutch government has yet to take, except on public transport, fearing the economic consequences as well as a public backlash ahead of elections next March.

The Dutch government has been widely accused of dragging its feet over the measures, long opting instead for what Rutte dubbed an “intelligent lockdown” and insisting there was no scientific basis for ordering people to wear masks.

But as new infections pass 3,000 a day, and with several European countries imposing travel restrictions on people coming from the Netherlands, the government was forced to act.

On Monday, Rutte announced that all bars and restaurants must close from 10 pm for three weeks, and said fans would be banned from sports matches.

He also advised people to wear masks in supermarkets in the country’s three biggest cities, Amsterdam, Rotterdam and The Hague.

Then, in a shambolic turnaround under pressure from parliament just two days later, Rutte called on people to don masks “anywhere you can’t see the sky”.

Rutte however stopped short of ordering people to wear masks, leaving it to shops to bar entry to people without them — which most supermarkets promptly said they would not do.

The Liberal premier himself remained sceptical, saying that it was “not as if that (obliging people to wear masks) worked well in France and Spain.”