A notification from FIA Director (cybercrime wing) announced suspension of Assistant Director FIA cyber crime wing Muhammad Asif Iqbal;
“Service of Muhammad Asif Iqbal, assistant director/senior investigator (BPS-17) cybercrime reporting centre Lahore is hereby placed under suspension with immediate effect till further orders”. The notification came without any prior warning or show cause notice, and no reason was given for the officer’s suspension. 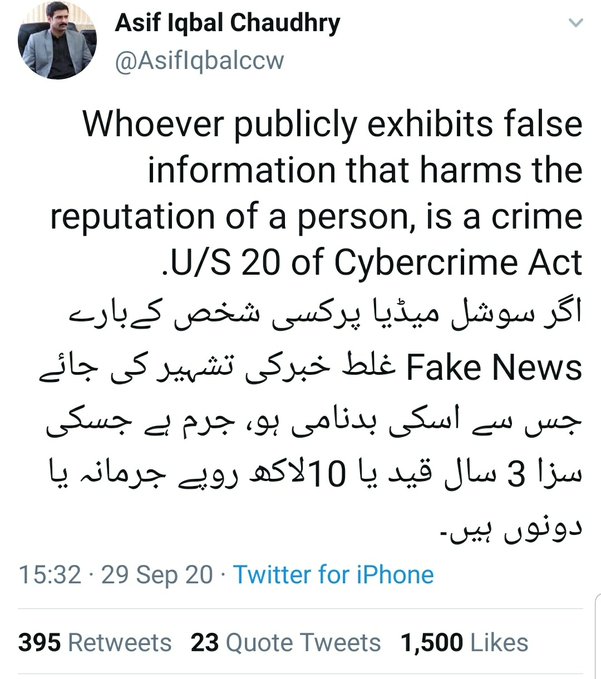 It has been reported that Muhammad Asif Iqbal, who often uses his social media to share informative content about different cyber crime laws and punishments, has been suspended on the basis of his tweet that mentioned Section 20 of the Prevention of Electronic Media Crimes Act 2016. His tweet which said “Whoever publicly exhibits false information that harms the reputation of a person, is [committing] a crime U/S 20 of Cybercrime Act” was shared by the daughters of a minister, who called the officer “Ali Zafar’s spokesperson”.
Sources claim that some “influential person” in Islamabad pressurized the authorities to get Asif Iqbal suspended.
However, the Cyber Crime Wing FIA denied these reports and stated that the officer has been suspended as he was “acting as spokesperson of Cyber Crime Wing on his own accord without permission which is against disciplinary rules”
Muhammad Asif Iqbal has not only been trying to create cybercrime laws awareness on social media but has also worked actively to solve a child pornography case, where he recovered more than 650000 pictures and videos.