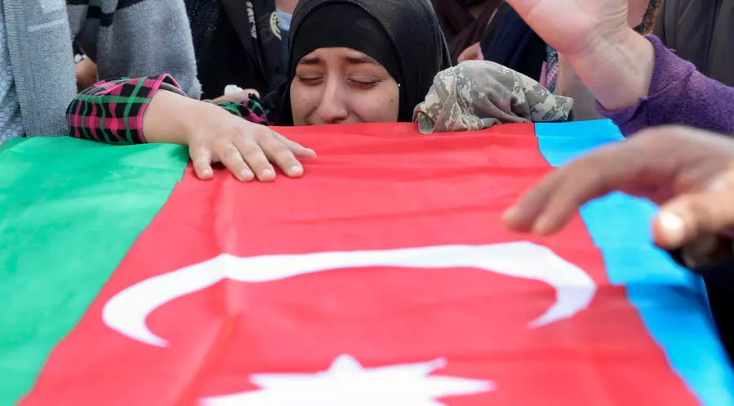 Heavy shelling between Armenian and Azerbaijani forces persisted Thursday despite fresh calls from world leaders for an end to days of fighting over the disputed Nagorny Karabakh region.

In the breakaway province’s capital Stepanakert, two explosions were heard around midnight as sirens sounded. Residents said the city had been attacked by drones.

The rival Caucasus nations have been locked in a bitter stalemate over the Karabakh region since the collapse of the Soviet Union when the ethnic Armenian province broke away from Azerbaijan.

The fiercest clashes between Armenian and Azerbaijani forces in years over the breakaway region ignited Sunday and confirmed deaths neared 130 as fighting spilled over into a fifth day.

Azerbaijan’s defence ministry said Thursday its forces had carried out “crushing artillery strikes against Armenian forces’ positions in the occupied territories,” throughout the night.

Separatist officials in Karabakh described the overnight situation along the frontline as “tense” and said both sides exchanged artillery fire.

“The enemy attempted to regroup its troops, but Armenian forces suppressed all such attempts.”

The two sides claim to have inflicted heavy losses on opposing forces and ignored repeated calls from international leaders to halt fighting that carries the threat of drawing in regional powers Turkey and Russia.

Yerevan is in a military alliance of ex-Soviet countries led by Moscow and has accused Turkey of dispatching mercenaries from northern Syria to bolster Azerbaijan’s forces in the Karabakh conflict.

It also claimed earlier this week that a Turkish F-16 flying in support of Baku’s forces had downed an Armenian SU-25 warplane, but Ankara and Baku denied the claim.

Moscow has repeatedly called for an end to the fighting and on Wednesday offered to host negotiations.

It also said it was concerned that members of illegal fighting groups, including from Syria and Libya, were being deployed to the fight.

Confirmed deaths have risen to 127 including civilians, with both sides claiming to have inflicted heavy losses on the other.

Armenia has recorded the deaths of 104 soldiers and 23 civilians.

Azerbaijan has not admitted to any military casualties, but an AFP journalist in the southern Beylagan region witnessed the funeral of one soldier killed in the clashes.

Armenian Prime Minister Nikol Pashinyan and Azerbaijani leader Ilham Aliyev have both rejected the idea of holding talks even as calls for a halt in the fighting mount.

Russian President Vladimir Putin and his French counterpart Emmanuel Macron, in a telephone conversation late Wednesday, issued the most recent call for a complete halt to fighting in Karabakh and said they were ready to intensify diplomatic efforts to help resolve the conflict.

Karabakh’s declaration of independence from Azerbaijan sparked a war in the early 1990s that claimed 30,000 lives, but it is still not recognised as independent by any country, including Armenia.

France, Russia and the United States have mediated peace efforts as the “Minsk Group”, but the last big push for a peace deal collapsed in 2010.