* CM says small loans will be provided for 339 subsectors of 23 assorted sectors, including 26 subsectors of the textile industry 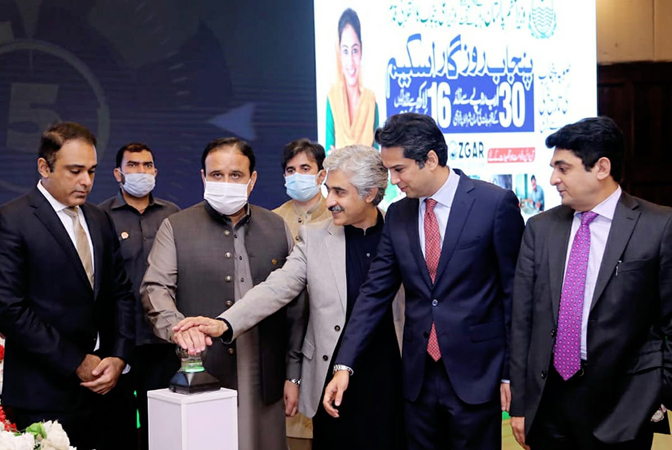 Chief Minister Punjab Sardar Usman Buzdar inaugurated the Rs 30 billion worth Punjab Rozgar Scheme at 90-SQA on Thursday and announced that more than 16 lac needy persons will get employment through this scheme.

Addressing the ceremony, the CM maintained the PTI-led government has started taking practical steps to fulfil the promise of employment provision and added that this scheme will make the youth self-reliant and job-providers. Youth will be provided loans on a priority basis and owners of small and medium enterprises, as well as those economically suffering from corona, would be able to resume economic activities.

Giving the details, the CM announced that loans of one lac to one crore rupees will be given at minimal interest rates in collaboration with Punjab Small Industries Corporation and the Bank of Punjab. Men, women, differently-abled, and the transgender community of 20 to 50 years of age would benefit from this beneficial scheme, he said. Small loans will be provided for 339 subsectors of 23 assorted sectors, including 26 subsectors of the textile industry, to boost business, trade, and manufacturing in the province, he added. This facility will promote the cottage industry and interested persons could expand their businesses by benefitting from Punjab Rozgar Scheme.

The CM maintained that the loan process has been made easy and the interested youth can submit their applications through PSIC, Punjab Bank websites, or Punjab Rozgar App. The PTI is committed to making the youth economically self-reliant and the government is enabling the youth as job-providers instead of a job-seeker. The government is transforming skills as an investment as it is the biggest social asset to make the youth prosperous, he further said.

Provincial Minister Mian Aslam Iqbal lamented that the metro was erected in the previous tenure but the welfare of the poor was badly ignored as past rulers spent a whopping 250 billion rupees on the orange line metro train but did not give a penny to the needy skilled workers. Had this money been spent on imparting skilled education to the poor children, the country would have been different today, he added. Common man’s welfare was not the agenda of the past government, he added. A project like the metro does not earn the poor the bread as such projects were started for the sake of kickbacks and political gimmickry. He asserted that practical steps have been taken to expedite the industrial process and the government is working for the betterment of the indigent strata. Finance minister Hashim Jawan Bakht termed the youth as an asset and announced to empower it to strengthen the national economy. This scheme will be reviewed every month to make it better than the best. He announced to motivate banks to give loans to the housing sector and hoped that the scheme would prove a game-changing initiative. MD PSIC stated that the target of giving loans to 68 thousand SMEs has been fixed. Ministers, parliamentarians, and others attended the ceremony.

Chief Minister Punjab Sardar Usman Buzdar has sought a report from RPO Sheikhupura about the gang rape of a girl in the precinct of PS Mangtanwala. The CM has further directed to fulfil the requirements of justice by arresting the perpetrators of crime. The police have registered a case.