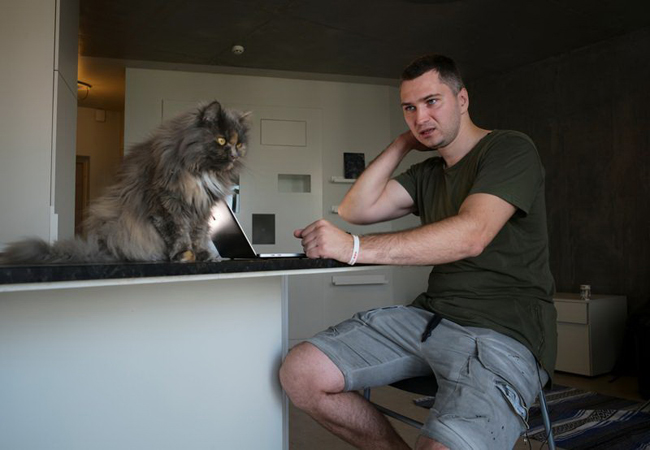 After Max Korolevsky said he was detained and beaten by security forces during mass protests in Belarus, he asked his IT company to transfer him to neighboring Ukraine.

The 30-year-old, head of software testing at a technology firm he declined to name, is now in Kyiv, part of an exodus of workers from Belarus’ flourishing IT sector who are fleeing turmoil since a disputed Aug. 9 election.

Mass protests have rocked the country and represent the gravest threat to President Alexander Lukashenko’s rule since he took power 26 years ago.

Neighboring countries from Ukraine to the Baltics have rolled out the welcome mat for people like Korolevsky and are wooing companies to relocate with fast-track immigration procedures, tax breaks and help finding office space.

Poland, for example, has set up a 24-hour hotline and offered fast visas, Polish language classes for children and funding for start-ups.

Some Belarusian tech firms are transferring employees abroad or looking to move out altogether, saying a crackdown on protests made employees feel unsafe and internet blackouts disrupted business.

In response to Reuters questions about the exodus, the state-run Belarus Hi-Tech Park, the country’s IT hub, played down the impact of IT workers leaving.

“Hi-Tech Park has held thorough analysis of the real situation, including consultations with CEOs and key investors,” it said. “It (is) clear that most IT-related businessmen are willing to keep working in Belarus as before.”

For countries offering to take in IT workers, it is a chance to scoop up professionals from a thriving industry that accounts for 5% of Belarusian exports.

Some 2,000 IT workers moved from Belarus to Ukraine since mass protests broke out following the Aug. 9 election, Ukraine’s Minister for Digital Transformation Mykhailo Fedorov told Reuters.

He compared it to the support Kyiv received after the 2014 Maidan protests swept a pro-Western government to power.

Western countries have backed Ukraine with loans, closer trade ties and military aid in its standoff with Russia following the Maidan protests and Moscow’s annexation of Crimea.

Latvia said 12 companies had decided to move. Lithuania’s investment agency has been talking to over 85 companies in the wake of the election turmoil, according to Director of Business Development Gediminas Koryzna.

The IT industry played a prominent role in the protests, creating online platforms to trace people who went missing during the security crackdown and collecting funds for them.

Thousands of employees of some of Belarus’ leading technology companies also posted an open letter online in August threatening to leave Belarus en masse, accusing the government of creating an “atmosphere of fear and violence.”

Lukashenko has not commented directly on IT companies threatening to leave, but criticized the sector which has benefited from tax breaks and the ability to tap an educated local workforce.

“I have already created paradise for them. No, it turns out they are missing something. They say they want power,” he said at a public event on Sept. 1.

The Belarus Hi-Tech Park, on the eastern outskirts of Minsk, has grown to 750 companies since its launch in 2006, employing 58,000 people and earning $2 billion in exports, according to government figures from the end of 2019.

“None of the residents applied to exit Hi-Tech Park, while current temporary movements of personnel do not exceed the normal level of day-to-day operations,” it said in a statement.

Korolevsky was cycling through Minsk in August when he says he was hauled into a van by security forces and taken to a detention center on the third night of mass demonstrations against Lukashenko.

“They took me aside, threw me on my knees, began to beat me with truncheons,” he told Reuters in Kyiv. “I said, ‘guys, I’m going home, I have a cat and a dog at home. What do you want from me?'”

Three days later Korolevsky was released with bruises on his back, arms and legs, and asked to be moved abroad.

The state Investigative Committee did not reply to a request for comment about Korolevsky’s complaints. The committee is responsible for investigating major crimes and has been reviewing allegations of prisoner abuse amid the uprising.

Security fears aside, internet outages have also played a part in the IT exodus.

The outages, which some protesters blame on authorities wanting to stop them coordinating rallies and sharing pictures and videos online, have caused severe disruption for firms whose clients are mostly based in the United States and Europe.

Minsk blamed foreign interference for the blackouts that hit the capital and other cities over several days immediately after the election. Mobile internet users still regularly complain of interruptions on days when major protests are expected.

The Investigative Committee did not respond to a request for comment. From its Minsk office, which employs 310 people, Gismart shifted 20 staff to Ukraine temporarily to cope with the internet outages and will relocate 20-30 permanently.

“Many people are in the mood to say: ‘We can’t take it any more, let’s do something about it, we want to go somewhere else’,” administrative director Eugene Nagel told Reuters.

Ukraine’s government exempted Belarusians from a temporary ban on foreigners and is working with local businesses like Kyiv-based tech firm S-PRO to help IT companies relocate.

“Our idea was that when the internet goes off for the guys, they get on the plane, an hour later we meet them at the Kyiv airport, bring them to the office,” said Elena Izraylevych, Chief Financial Officer at S-PRO.

“Here every day is important when there are interruptions to the internet,” Ilya Lashch, Lightpoint Global’s owner, told Reuters. He said Izraylevych gave advice on local issues and put him in touch with people who would help with registration. Lightpoint is registering as a company in Ukraine but has not decided whether to leave Minsk permanently.

“Simply put – it is no longer safe in Belarus. If one goes to shop for milk, she can’t be sure she doesn’t get detained,” said Olle Pridiuksson, founder of a startup called Devrel Events that is moving their software developer from Minsk to Lithuania.