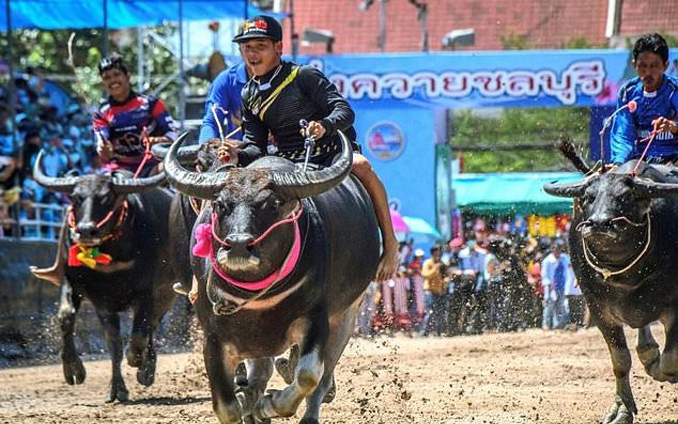 Thailand’s annual water buffalo racing festival ploughed ahead on Thursday despite coronavirus travel restrictions leaving the event with a fraction of its usual tourist crowds.

The sturdy bovines were used as draught animals in farms across the kingdom until they were largely replaced by tractors and modern machinery just a few decades ago.

But farmers in Chonburi province near Bangkok have kept up traditional buffalo racing as a way to mark the start of the annual rice planting season and the end of Buddhist Lent.

The beasts thundered down the 100-metre track with jockeys balanced precariously on their rumps before leaping off at the finish line.

The course is typically caked in shin-deep mud but was bone dry for this year’s event after a stretch of sweltering heat, and fire trucks were on hand to cool off the four-legged competitors.

This year’s festival was capped off with a “beauty pageant” to judge the most attractive buffalo.

“They were so well-decorated in (costumes) and flowers it took me a while to realise there were buffaloes underneath,” British expatriate Robert Owen told AFP.