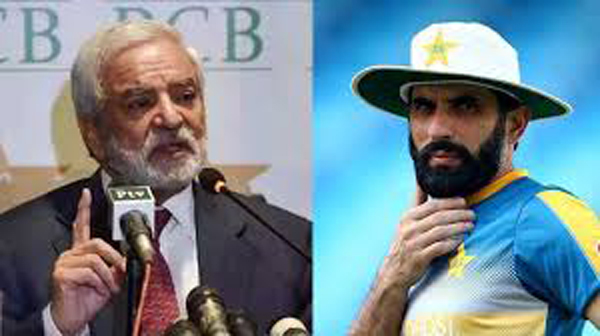 ISLAMABAD: The Pakistan Cricket Board (PCB) Chairman Ehsan Mani has given an ultimatum to national team’s head coach-cum-chief selector Misbahul Haq to decide between working for the board or his department Sui Northern Gas Pipelines Limited (SNGPL). While speaking to reporters after the National Assembly Public Accounts Committee (PAC) meeting in Islamabad on Wednesday, the PCB Chairman said that no employee of the board was allowed to work for any other organization. “Misbah has to pick one job as you can’t draw salaries from both. All those having jobs with departments and also getting salaries from the PCB will have to pick one. There will be no exception for anyone including Misbah,” he said. Mani also confirmed that the board had sought explanation from Misbah for meeting with Prime Minister Imran Khan without informing the top officials of the board. “Yes, that was like crossing the line. The matter has already been referred to the disciplinary committee and action will be taken.” Misbah along with Test captain Azhar Ali and veteran all-rounder Mohammad Hafeez decided to consult the PM regarding the resumption of departmental cricket. It must be noted that PM Imran in the meeting, reiterated his stance that there is no place for departmental cricket in the domestic structure.