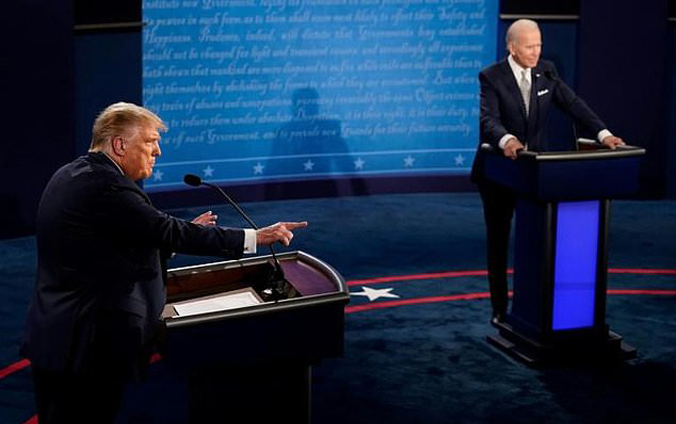 Asian markets were mixed Wednesday as traders turned their attention to the first US presidential debate, while hopes for a second stimulus were given a boost after top Democrat Nancy Pelosi said she was hopeful a deal could be done.

Another round of healthy Chinese data also lifted optimism, while analysts pointed out that end-of-quarter bookkeeping by investors was also providing some support to stocks after a torrid September characterised by sharp losses.

But the ever-present gloom of rising virus infections and deaths continues to dampen the mood on trading floors as dealers fret over the reimposition of containment measures and lockdowns in key economies.

Donald Trump and Joe Biden traded personal barbs in the first of three debates ahead of the November 3 vote, with observers saying the president needed a strong showing as he trailed in most national and battleground polls.

There was little initial reaction at the end of the debate. “The market is starting to price in potentially a blue sweep,” Jimmy Chang, at Rockefeller & Co LLC, told Bloomberg TV, referring to Democrats winning the White House and both houses of Congress. He added that while such a scenario could lead to higher taxes, it would also likely see a bigger stimulus package being passed.

On Tuesday, a top aide to Democratic House Speaker Pelosi said the lawmaker had spoken for a second straight day with Treasury Secretary Steven Mnuchin, and the two agreed to continue negotiating, raising hopes they could break a months-long impasse.

Pelosi said she was “hopeful” an agreement could be reached, though her party and Republicans remain miles apart on their proposals.

The Democrats’ “tabling of a $2.2 trillion fiscal support package hasn’t drawn any favourable response as yet from the Republican side,” said National Australia Bank’s Ray Attrill.

“Trump’s economic advisor Kudlow said that the true cost of the Democrats’ package is more like $2.6 trillion and about one-third of it looks like not being strictly tied to the pandemic. Talks are expected to continue but confidence in a deal before the pre-election Congressional recess is not running high.” The news was not enough to help US markets with all three main indexes ending in the red.

However, Asian traders were slightly more upbeat, helped by data showing factory activity in China improved in September, indicating that the recovery in the world’s number two economy was on track. Chinese business media group Caixin noted that “new business expanded at the strongest rate since January 2011” and employment stabilised in the manufacturing sector, while easing of lockdown measures contributed to recovery momentum.

But Tokyo ended the morning in negative territory, while Sydney and Wellington were also in the red.