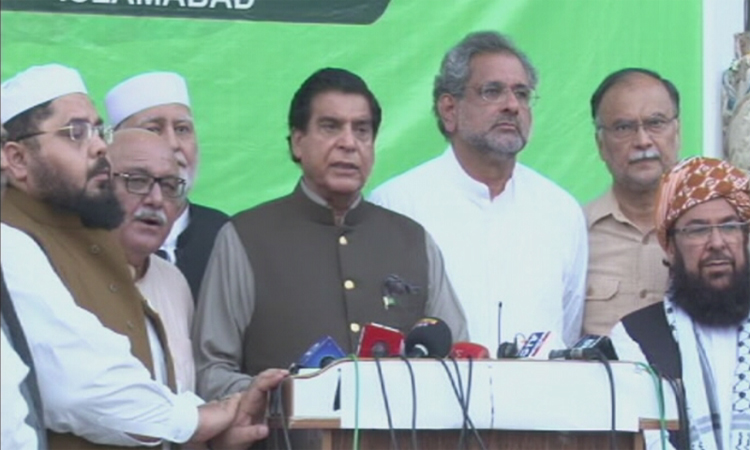 The Pakistan Democratic Movement (PDM) announced on Tuesday that it will hold its first public rally on October 11 in Quetta to rid the country of the current ‘unconstitutional system’, a private TV channel reported.

“On October 11, PDM will hold [its] first public rally and then the movement will spread all over Pakistan and rid Pakistan of this unconstitutional system,” former prime minister Shahid Khaqan Abbasi told a press conference after first formal meeting of the PDM – an alliance of almost all major opposition parties that seeks the government’s ouster – in Islamabad.

The former prime minister announced that PDM’s steering committee was approved in meeting of the opposition parties. He said that the organisational structure that has been developed will now be sent to party leaders for approval. He also said that other details pertaining to the organisation will be shared with the people soon.

“This movement will keep growing and will be successful in ridding Pakistan of this undemocratic process,” said Abbasi, accompanied by other opposition leaders. “You will see that this movement will give rise to a true political change in Pakistan’s political history,” he said, adding that all opposition parties had consensus on the decisions taken in the meeting. He said the meeting strongly condemned the ‘shrinking’ space for democracy in the country and discussed rising inflation, unemployement, ‘historic corruption’, the state of the economy and people’s issues.

The PML-N leader said that the issues ‘frustrating’ the people were also deliberated in the meeting. “You will see that this movement will bring about a real political transformation in the country,” he added.

Former prime minister Raja Pervaiz Ashraf, while briefing the media on the steering committee, said that the chairmanship of the body will be assigned on a rotational basis. He said that the meeting especially condemned the arrest of Opposition Leader in National Assembly Shahbaz Sharif. “Due to this [arrest], democratic institutions will weaken and the anger within the Pakistani people will rise,” he warned, and also added that there was ‘no reason’ to arrest the opposition leader if a reference was filed against him.

Questioning the need to arrest Shehbaz after a reference against him had been filed, Pervez said the ‘government-NAB nexus’ has become apparent after government ministers predicted on television the arrests of various opposition leaders. He said the Oct 11 rally will be followed by a series of public meetings in all provinces. He added that these rallies will take place as the PDM believes that the Pakistani people are under a lot of pressure. “The opposition cannot remain quiet. We are part of a democratic system and we want to move forward democratically,” said Ashraf, adding that it is their resolve to stand with the people of Pakistan.

Jamiat Ulema-e-Islam Fazl’s Maulana Ghafoor Haideri vowed that the opposition’s movement will continue till they remove the ‘selected government’.

In line with PML-N supremo Nawaz Sharif’s directives last week, the party issued a circular on Tuesday barring all members from meeting any personnel from the armed forces and its related agencies in personal or official capacity. “If, however, such a meeting is necessary in the interest of national security and/or fulfillment of constitutional responsibilities, then it shall be done indiscreetly and with the prior permission of the party’s Quaid,” the circular issued by PML-N Secretary General Ahsan Iqbal said.

In the circular issued, Iqbal said the party was fighting the battle for Pakistan’s survival. “Our stance is based solely on national interests for constitutional supremacy in the country and remains above political and personal concerns,” he said, adding that he had been instructed by Nawaz Sharif to convey the party’s policies regarding meetings with the military leadership. “The PML-N is of the firm view that such meetings, even though conducted in good faith, may cause undue controversies. We all know that the contents of such meetings may be selectively leaked in order to serve specific interests and malign the political fraternity.”

He said while Nawaz had noted the ‘overwhelming response’ from the party and the public as expressed at the PPP-hosted multiparty conference, he expected strong and unwavering support from the party leadership during a time when the country is passing through a ‘defining democratic crisis’.