Max Ehrich reveals more details about how he learned of split 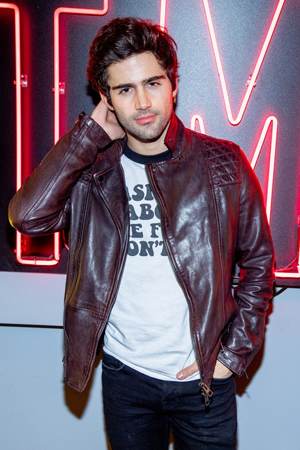 Max Ehrich is sticking to his story of how he learned about his breakup with Demi Lovato.

Earlier this week, E! News reported the couple called off their engagement, with a source claiming the pop star was the one to officially end their romance. However, The Path star posted a series of Instagram Stories on Sunday, Sept. 27 to share how his relationship status unfolded for him in real-time.

“I was on the set of my new movie, Southern Gospel, with crew and cast members right next to me who literally watched me open my phone where I then opened a tabloid,” the 29-year-old actor began his caption.

“This is the God’s honest truth of how I found out about the ending of the engagement,” he continued, “and have people from my film who saw the whole thing go down and helped me get back into character to continue my job.”

“I had cast and crew with families relying on me to do my job,” he explained. “That being said, please end this narrative and focus on more important issues in the world. I love and forgive everyone involved. Let us be. Let us heal. God bless.”

Just a day prior, Max claimed he found out about his breakup from the media.

“Imagine finding out to [sic] the status of your relationship through a tabloid,” he wrote on Instagram Stories on Saturday, Sept. 26. “While your [sic] in the middle of filming a biopic movie about a Pastor in a Christian Church whose intention of the film is to help people.”

“Demi did tell him beforehand,” the insider shared, noting that Max is “just trying to stay relevant. Her family thinks he is crazy and is so relieved she has taken this step.”

This isn’t the first time an insider has shared the same sentiments. Last week, another source explained the reason the singer decided to put an end to their romance.

“They were arguing a lot. There has been a lot of tension and Demi left him to get a clear head,” the insider described at the time. “She didn’t know who Max truly was and didn’t think he had good intentions. There were many red flags she was ignoring and trying to turn a blind eye to.”

According to the insider, Demi’s mother, Diana De La Garza, and her close friends “were warning her about him… and wanted her to get out sooner than later.”

The couple’s relationship “started going downhill” before Max traveled to Atlanta, GA. to film his new movie, the insider pointed out.

It’s no secret the pair was inseparable in the last year and had one whirlwind romance. The two got engaged in July, after just four months into their relationship.

“When I was a little girl, my birth dad always called me his ‘little partner’ – something that might’ve sounded strange without his southern cowboy like accent. To me it made perfect sense. And today that word makes perfect sense again but today I’m officially going to be someone else’s partner,” Demi wrote on Instagram at the time of her engagement.

“@maxehrich – I knew I loved you the moment I met you. It was something I can’t describe to anyone who hasn’t experienced it firsthand but luckily you did too..,” she continued. “I’ve never felt so unconditionally loved by someone in my life flaws and all. You never pressure me to be anything other than myself. And you make me want to be the best version of myself.”

She closed, “I’m honored to accept your hand in marriage. I love you more than a caption could express but I’m ecstatic to start a family and life with you. I love you forever my baby. My partner. Here’s to our future!!!!”