Shehbaz behind bars, once again 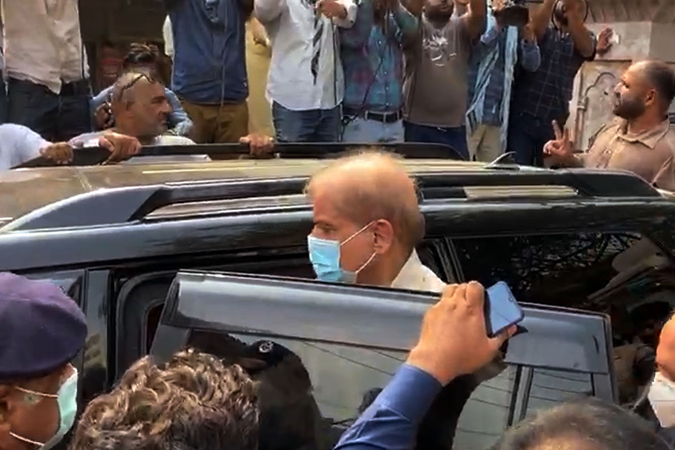 The anti-graft body arrested Opposition Leader Shehbaz Sharif Monday over his alleged involvement in a money laundering case after a court rejected bail for him, a move coming just before planned protests next month by his party seeking to force Prime Minister Imran Khan’s resignation.

PML-N President Shehbaz Sharif was arrested at Lahore High Court following the bail denial, said Faisal Raza Bukhari, a lawyer for the National Accountability Bureau. The anti-graft body now will question Sharif at the jail, he said. The arrest is in relation to a money laundering and assets beyond means case filed by NAB earlier.

A large number of PML-N workers, including women, were at the LHC, where Shehbaz was arrested, a private TV channel reported. They chanted against PTI-led government as the former Punjab chief minister and president of the PML-N was taken away by officials. Shortly after the arrest, a scuffle broke out between security personnel and the Shehbaz’s supporters.

Last week, the LHC had extended the pre-arrest bail of Shehbaz, while arguments of his counsel were in progress and had directed him to conclude his arguments in the next hearing.

Party spokesperson Marriyum Aurangzeb criticised the move, saying, “I want to state it clearly here that the PML-N leader was arrested by the NAB on the behest of Prime Minister Imran Khan. For the last two years, the public has been witness to this spectacle of NAB trying to subdue emerging voices by using corruption and various other cases.” “Just like the general elections of 2018, it has been decided to rig the upcoming Gilgit-Baltistan polls,” she alleged.

The PML-N spokesperson further claimed that Shehbaz’s arrest was ‘an attempt to paralyse’ the political developments taking place following the opposition’s multiparty conference. “We are not afraid of these tactics and will face all odds bravely,” she said. “This is a scheme – not to arrest Shehbaz Sharif, but to arrest all projects and initiatives to bring about progress in the country. NAB was ordered to arrest the leader before the GB polls and that is what has happened,” she went on to say. “I would like to convey to the PML-N supporters that your leadership is valiant and facing all odds in the face of adversity,” she added.

The former chief minister of Punjab had earlier reached the LHC for a hearing of his interim bail petition in the money laundering case filed by the NAB. A two-member bench of the LHC presided over the hearing, while lawyers representing the former Punjab chief minister presented their arguments after a three-day hiatus.

During the proceedings, Shehbaz’s legal counsel Azam Nazir Tarar said that the PML-N president’s arrest at this stage of the case could not be justified. He said that Shehbaz was already facing two other references filed by NAB, arguing that the cases against the opposition leader were ‘fake’. “Local bodies elections are coming up, the government wants Shehbaz Sharif to go to jail,” he declared, and pointed out that though the copies of the reference had been provided, Shehbaz was yet to be indicted.

NAB’s legal representative Faisal Bukhari said that NAB had started the money laundering investigation after fulfilled all legal formalities”. He further said that there were decisions by courts that dictate that arrests can take place after filing a reference. The accountability watchdog’s lawyer told the court that Shehbaz’s assets between 2008-2018 had grown multifold. He further said that the opposition leader could not explain how he was able to buy four apartments abroad and had not shared when his business had started and its income.

Tarar told the court that the former Punjab chief minister had done a net saving of Rs81 billion in the Orange Line Train Project and Rs400 million in the taxi project. Collectively, Tarar said, Shehbaz had saved Rs1 trillion in net savings. He further said that the PML-N president had never received any ta-da or salary.