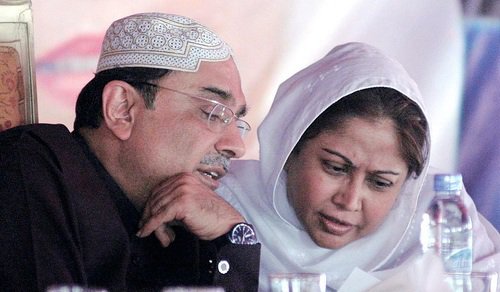 An accountability court on Monday indicted former president and PPP Co-chairperson Asif Ali Zardari and his sister Faryal Talpur in the mega money laundering case, with the accused pleading not guilty to all charges, a private TV channel reported.

Justice Azam Khan presided over the proceedings in an Islamabad court where Zardari, accompanied by his daughter Asifa, and Talpur were presented to hear the charges being brought against them. The PPP leader’s lawyer, Farooq H Naik, was not present, reportedly due to a commitment at the Supreme Court.

Lawyers of two other accused in the case, including Pakistan Stock Exchange (PSX) former chairperson Hussain Lawai and banker Taha Raza, were given a copy of the charge sheet after being indicted by the court.

It should be noted that at the last hearing, the court had dismissed Zardari’s pleas in three corruption references and ordered that he be indicted.

Meanwhile, the PPP co-chairperson on Monday challenged the mega money laundering and Park Lane reference trials in the Islamabad High Court, seeking acquittal in both. The accountability court has postponed the indictment of the former president in the Park Lane and Thatta Water Supply references till October 5. While responding to media queries upon indictment in the alleged multi-billion-rupee money laundering case, Asif Zardari said he has walked these paths earlier as well, referring to earlier corruption trials against him. When asked whether the PPP will stand by former prime minister Nawaz Sharif according to the decisions taken by the all parties conference, Zardari responded saying, “Inshallah [If God wills it]”.

PPP Chairman Bilawal Bhutto Zardari termed the indictment of Asif Zardari as ‘victimization’ and asked why, when the opposition is facing court cases, cabinet members and Prime Minister Imran Khan’s sister are not summoned to the courts.

Bilawal said political victimisation of the opposition continues during a global pandemic, adding that Zardari and Talpur have been appearing in court for the past two years. “Runaway dictator traitor, three special assistants, ministers and the premier’s sister won’t be summoned because we have two laws in Pakistan,” he said in a tweet.

Zardari is facing multiple corruption cases that have stemmed from a mega money laundering scandal, which came into the limelight in 2018. The former president, Faryal and several of their business associates are being probed as part of a 2015 case regarding fake accounts and fictitious transactions – which were initially found to have totalled Rs35 billion – conducted through 29 ‘benami’ accounts in Summit Bank, Sindh Bank and UBL.