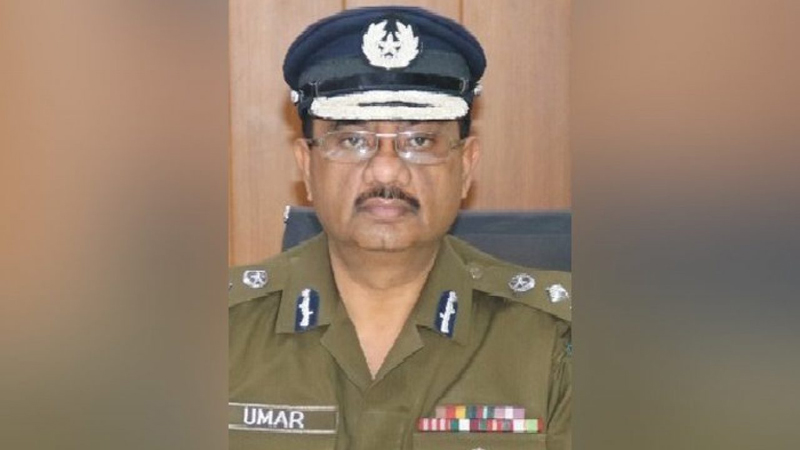 The city’s top cop has once again landed himself in hot waters during a hearing of the Senate Functional Committee on Human Rights to talk about the motorway rape case, on Monday, a private TV channel reported.

Lahore’s Capital City Police Officer (CCPO), Mohammad Umar Sheikh, spoke about the authorities’ response time to a distress call made by a woman when her car broke down on the M11 Motorway on September 9, saying at one point that it was approximately 28 minutes whereas the officers who reached the site had said they did so under six minutes.

The hearing was held to discuss a gang-rape incident earlier this month when two armed men allegedly raped a woman in front of her children when she was stranded on the Lahore-Sialkot motorway. The horrific case has led to country-wide protests and calls for reforms in laws pertaining to the perpetrators of sexual assault.

In the hearing, CCPO Sheikh also said the motorway rape survivor was travelling without her husband’s permission. To which, PPP Senator Krishna Kumari Kohli – a member of the Senate committee – reprimanded him over his comment, telling him not to make any such assumptions in the future. “Did this lady tell you,” she asked. “Do not make assumptions like that,” Kishoo Bai told him when he said he had made a “guess”.

Not only that but Lahore’s top cop also forgot the name of Abid Ali, the prime suspect who has been in the wind for 20 days and whom the eight special teams – comprising personnel from all of the Punjab Police’s departments – have failed to apprehend despite spotting him at least thrice across the province.

Addressing the committee members, Sheikh said: “If [police helpline] 15 had received the call, we could have reached that place in 25 minutes. The first call to 15 was at 2:47am made by a passerby and the 15 officials reached at 3:15am.”

To which, Marri said either the CCPO had no information or the committee had been misinformed.

“Then your cops are lying,” Marri shot back at him.

“My job is to stop the crime and catch the culprits,” Sheikh replied. “Neither is there a CCTV [camera] at the toll plaza nor is an actual toll tax receipt given.

“Five technologies were used in the motorway rape case; geo-fencing, DNA filing, and fingerprint technology. Even the American police do not respond [to a crime] in six minutes”.

The committee members expressed anger over the contradiction in the police officer’s statement.

When the CCPO apologised once more, Marri said: “You don’t have to apologise again and again.”

Mustafa Nawaz Khokhar, the chairperson of the Senate committee, said it had summoned Sheikh using its legal authority. “Don’t tell us you if went to a committee or to the court. I am a lawyer and have had criminal cases’ practice.”

PMAP Senator Usman Kakar, also part of the committee, opined that the policeman should have been punished considering the words he had used.

“The CCPO only apologised out of fear of the court,” Kakar said.

Sheikh told the committee that Abid’s data had successfully been found from the Punjab Forensic Science Agency’s (PFSA) 2013 records. “The first case of Daniel Pearl in Pakistan was solved with [the use of] DNA,” he said.

“If Abid was involved in 2013, why was he released,” asked Khokhar.

The cop once again joined his hands in front of the committee in a bid to seek forgiveness. “Babar Malhi’s blood and DNA have also matched,” he said.

At which, the committee members paused, in shock, and asked: “Babar Malhi or Abid Malhi?”

The cop responded: “Forgive me my sister, I have joined my hands in front of you, I beg you. I am 56 years old and my memory, too, is according to my age.

“I have sought forgiveness from the committee and apologised. Let me just once stand in front of the joint meeting and I will apologise in front of everyone there.”

Upon further probing, he said: “What if there is an outrage if I say something? I have told the chief justice who is responsible. I will introduce court-martial law in the Punjab Police.

“There are 500 people and something or the other gets leaked,” he said of his police force. “If it was in my power, I wouldn’t spare anyone. This is what will happen to anyone who wishes to bring reforms,” he added, referring to himself.

Speaking further on the incident, he said the inquiry number was of the motorway but the rescue vehicles come under the Frontier Works Organization (FWO). “In this case, too, an FWO officer was taken on the woman’s conference call. He told her he would send a car. “That car was on the M2 [motorway] and it took a long time to reach the site,” Sheikh said. “The crux of the matter is that this alert should have been to 15.”