An accountability court on Monday indicted former president and PPP co-chairperson Asif Ali Zardari and his sister, Faryal Talpur, in a mega money-laundering case, with the accused pleading not guilty. 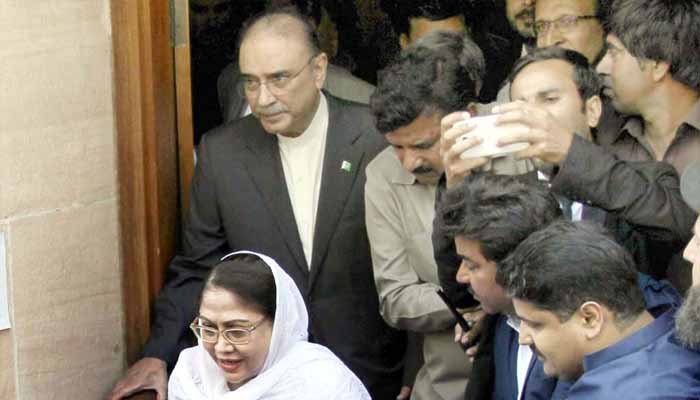 Justice Azam Khan presided over the hearing in the Islamabad court where Zardari, accompanied by his daughter Asifa, and Talpur were presented. However, the PPP leader’s lawyer, Farooq H Naik, was not there reportedly due to his commitment at the Supreme Court.

On September 23, IHC had extended Zaradri’s interim bail till October 15 and directed NAB to submit a reply again.

The court approved the former president’s request for exemption from attendance. It asked Zardari’s lawyer, Farooq H Naek, about the difference in this case as the court had already granted post-arrest bail to his client.

To this, his counsel replied that the case was different as the notice for it came on May 2019.

The NAB prosecutor informed the court that this case was now at the investigation stage; it was previously in the inquiry stage. “We will give arguments on merit in this case. Asif Zardari’s arrest warrant is in process,” he added.

In October 2015, the anti-corruption wing of the Federal Investigation Agency (FIA) in Karachi received a tip-off of suspicious intra-bank transactions from the Summit Bank, Sindh Bank, and the United Bank Limited (UBL).

The account-holders’ profiles did not match their earnings/income.

The FIA suspected that these accounts were being run by the Zardari Group and Omni Group, amongst others.

The case dragged on until June 2018, when the Supreme Court took suo moto notice of the fake accounts and directed a Joint Investigation Team (JIT) to probe the matter.