The death toll in the passenger van fire on the Karachi-Hyderabad motorway has increased to 17 after two more victims passed away during treatment. 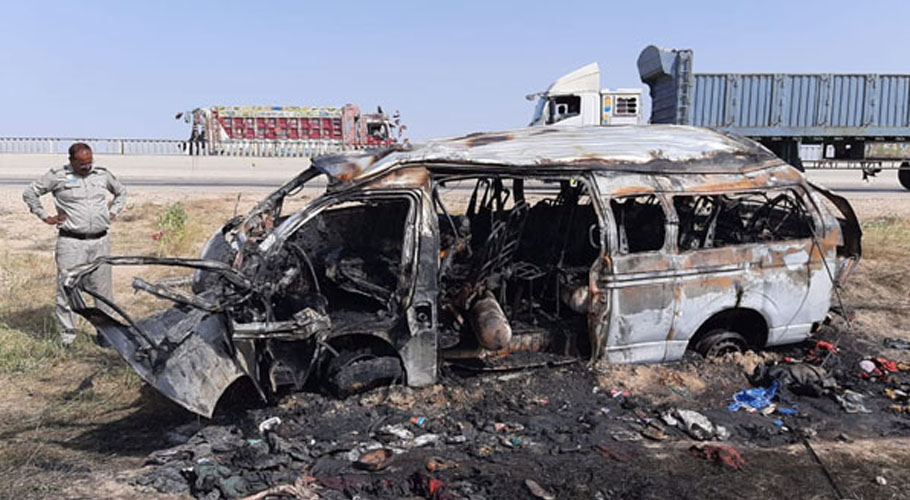 The ill-fated passenger van carrying 22 passengers was coming to Karachi from Hyderabad when it overturned near a cement factory in Nooriabad and caught fire.

The deceased were shifted to Abbasi Shaheed Hospital while the injured were initially shifted to Liaquat University Hospital in Hyderabad.  The police have also registered a case against the passenger van driver for negligence on the complaint of SHO Nooriabad.

Two more injured who had sustained serious burn injuries in the fire succumbed to their injuries on Sunday taking the death toll to 17. Six members of a family from Hyderabad were reportedly among the victims, who were on their way to Karachi to visit their relatives.

“Two minor girls aged between five to seven years, one boy aged about six years and eight women and four men were among the passengers who lost their lives in the tragedy,” Nooriabad SHO Abdul Latif told The News. “The driver picked up some 12 passengers from Latifabad while the remaining from other spots en-route.”

The bodies of 14 passengers have been kept at the Edhi morgue in Karachi’s Sohrab Goth for identification purposes. “DNA samples of the bodies have also been collected at the Abbasi Shaheed Hospital. The samples have been sent to a laboratory in the University of Karachi,” said the SHO Latif. “The bodies would be handed over to their families after DNA results.”

Sharing the details about the cause of the accident, the officer said that the initial investigation suggests that bonnet of a Suzuki Cultus car broke off and hit the passenger van, following which the driver lost control of the vehicle.