‘The Trial of the Chicago 7’ Review 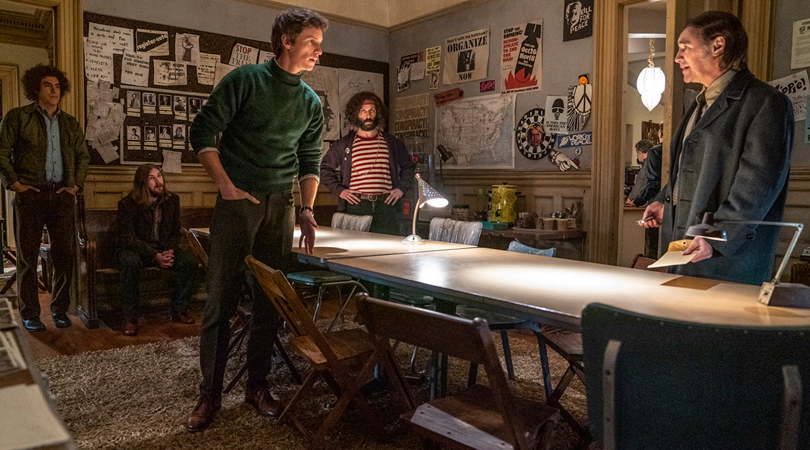 It’s a curious thing that in the movie culture of the last 50 years, you can count on one hand (or maybe one middle finger) the good dramas that have been made about the political counterculture of the 1960s. The turbulence of that era has never stopped casting a shadow over our own. Yet there’s something about it that resists being captured with any real onscreen authenticity. When you gather up a bunch of actors and dress them like hippies and have them carry protest signs, it tends to look like what it is: a staged insurrection. And the ’60s were such an amped orgy of media signifiers — the flower-power fashion, the groovys and hey, mans, the rock psychedelia, the jabbering on about revolution — that the era, viewed in hindsight, has a way of devolving into a compost heap of cliches.

Yet Aaron Sorkin’s Sorkin doesn’t just re-stage the infamous trial, in which a motley crew of anti-war leaders were charged with plotting to stir up violence at the Democratic National Convention in Chicago in 1968.

He jumps into the trial, goes outside the trial, cuts back to the demonstrations, and leads us into the combustible clash of personalities that was going on behind the scenes — the way, for instance, that the Yippie ringleader Abbie Hoffman (Sacha Baron Cohen), with his viper’s grin and showbiz-ready revolution-for-the-hell-of-it bravura, and Tom Hayden (Eddie Redmayne), the buttoned-down, furrowed-brow cofounder of Students for a Democratic Society (SDS), neither like nor trust one another, in part because they have a deep rift: Do you work to change the system from within, or jolt the system with shock therapy? (The movie’s answer is: both.)

Sorkin has a flowingly combative love for words, for drama that’s charged with competing notions of what’s right. He wants to hash it all out, to let the animating passions of the ’60s make their case — in court, but also out of court, among the people who fought the establishment and were still fighting amongst themselves about what they believed in.

As a docudrama, “The Trial of the Chicago 7” is layered and enthralling, and it adds up to something that could scarcely be more relevant: a salute to what political freedom in America really means, and a vision of how the forces who line up to squash it tend to be scoundrels who try to look like patriots.

The Chicago 7 trial, which began on Sept. 24, 1969, and lasted for close to six months, was one of the signature events of the ’60s, and it was a theater of the absurd — a mythological made-for-reality-TV showdown between the rude, shaggy, say-what-you-feel radical left and the uptight, controlling forces of the straitlaced American mainstream.

The defendants, on trial for “conspiracy” (a thinly based charge that, in this case, was less legal crime than metaphor), looked as out-of-place as the Grateful Dead at a meeting of the Chamber of Commerce.

Abbie Hoffman mouthed off in court like a stand-up comedian — he was Lenny Bruce gone Dada in a headband. And the judge, Julius Hoffman, who was born in 1895 (the fact that he had the same last name as the Yippie leader only added to the weird Oedipal warfare of it all), kept charging the defendants and their lead attorney, William Kunstler, with contempt of court when, in fact, it was clear that he had contempt for them — overruling every objection, suppressing key testimony, getting the same names wrong over and over again, putting his fear and loathing of the defendants right out there. He took their worst paranoia about the American criminal-justice system and made it come true.

The Chicago 7 trial was a circus, an outsize burlesque of a trial, yet it was also a deeply serious battle over who can say what — and how — in America. And that’s the level of import that Sorkin keys into.

Early on, John Mitchell (John Doman), the U.S. attorney general under Nixon, summons Richard Schultz (Joseph Gordon-Levitt) and Thomas Foran (J.C. Mackenzie), the ’50s-straight-arrow prosecutors he has chosen to handle to case, to his office, and tells them that a Justice Department investigation concluded that the Chicago demonstrations violated no federal law. (As we later learn, the investigation laid the blame for the chaos in the streets squarely on Mayor Richard Daley’s Chicago police force.) But he wants the defendants convicted anyway! In other words: This is a show trial — or, as Abbie Hoffman puts it, a political trial.

That’s why Abbie, on day one, disrupts the proceedings, speaking out of turn, winning laughs from the spectators — but when the defendants meet up afterward (they’re free on bail), Tom Hayden reminds them that if they keep up the antics they could all go to prison. Hayden accuses Abbie of secretly wanting to keep the Vietnam War going. That’s how much of a showboater he thinks Abbie is.

Abbie is there with his Yippie colleague, the shaggy-bearded Jerry Rubin (Jeremy Strong), who drops sharp observations in a stoned voice, and Hayden has his SDS cohort, Rennie Davis (Alex Sharp), a brainy geek in oxford shirts and glasses. This pair of duos, one hip and one square, are the yin and yang of the new youth culture. The other main defendant, David Dellinger (John Carroll Lynch), who’s in his mid-50s, is a lifelong peacenik who was a conscientious objector during World War II, and he looks like the mild-mannered Boy Scout troop leader he is. Making up the rest of the seven are Lee Weiner (Noah Robbins) and John Froines (Danny Flaherty), who have no idea what they’re doing there, and neither do we.

And then there’s Bobby Seale (Yahya Abdul-Mateen II). He’s the National Chairman of the Black Panther Party, and he came to Chicago during the convention to give a speech, then left a few hours later. He’s not really part of the Chicago 7 (he had no part in organizing the protests), but the prosecutors have attached him to the case because they think a Black Panther will scare the jury.

Seale keeps arguing with Judge Hoffman because his lawyer is in the hospital, and he wants a postponement — or the chance to act as his own attorney. The judge will allow neither, and their battle over protocol, which is really about something deeper, escalates until Hoffman orders Seale to be bound and gagged in the middle of the courtroom. This was one of the most disgraceful episodes in American history, and to see it enacted here, as it emerges from the judge’s personal neurotic power game, has a calamitous force. It’s a barely concealed act of racial terrorism, one that graphically symbolizes what the entire trial hangs on: whether the truth can be spoken out loud.

Sorkin has structured “The Trial of the Chicago 7” ingeniously, so that it’s never about just one thing. It’s about the theatrical insanity of the war in the courtroom, about how the government would stop at nothing (including flagrant attempts at jury tampering), and about the politics, at once planned and spontaneous, of how the Chicago protests unfolded.

It’s about Abbie doing stand-up riffs to college audiences, about the sneaky prevalence of FBI undercover agents, about how William Kunstler, played with masterful dour puckishness by Mark Rylance, combines the mind of a litigator with the heart of a grizzled rabbi, and about how Abbie and Tom circle each other with resentment, until they’re forced to confront each other in a great scene that seems to sketch in the next half century of American politics.

The performances are rich, avid, juicy, and, in several cases, memorable. Sacha Baron Cohen may be a head taller than the real Abbie Hoffman, but he catches the exuberance of Hoffman’s rascal Jewish charisma — the haughty Boston accent and fun-loving literacy, and the moral gravity that centered everything he said.

Eddie Redmayne, pale with gravitas, makes Tom Hayden the slightly uptight soul of the New Left, and John Carroll Lynch, as Dellinger, has one of the most moving moments in the film when he lets down his pacifist guard and slugs a court official. A delectable actor I won’t name plays Ramsey Clarke, the previous (uncorrupt) attorney general, and Yahya Abdul-Mateen II invests Bobby Seale with an incendiary awareness of how a rotting legal system is out to railroad him.

In each case, maybe because I grew up with the Chicago 7 (they were my heroes in seventh grade), I rarely forgot that I was watching actors, but the 82-year-old Frank Langella, as Judge Hoffman, does something uncanny. With his shiny reptilian eyes and lordly scowl, he digs into this grumpy old man, full of bitter decorum, and makes him the embodiment of a world that will do anything to hold onto its power.

Which may remind you of something else. The trial, as Sorkin presents it, is really about the soul of America — the ability to protest, to question the most fundamental actions of the government.

The overlap between the 1968 Chicago protests and the Black Lives Matter protests that have taken place this year is all too obvious. Yet the true parallel, I think, is that “The Trial of the Chicago 7” is really about what it looks like when a society starts to treat people speaking freely as if they were doing something dangerous. The movie reminds you, quite stirringly, that the Chicago 7 weren’t attacking America. They were upholding it.