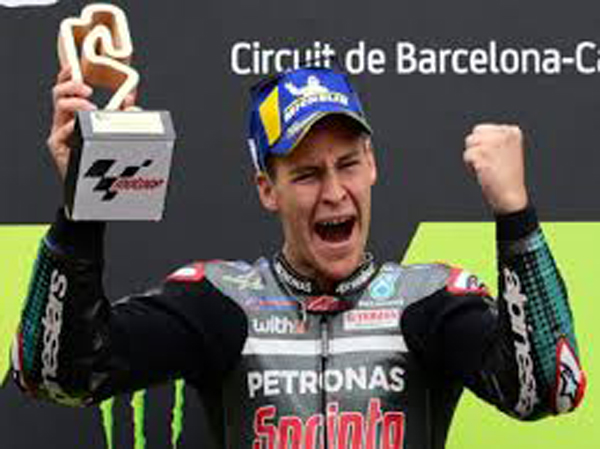 BARCELONA: Petronas Yamaha’s Fabio Quartararo won his third race of the season at the Catalunya Grand Prix in Barcelona on Sunday to reclaim the lead in the MotoGP world championship standings. Frenchman Quartararo took the chequered flag for the first time since his back-to-back triumphs at Jerez in July, finishing ahead of Suzuki duo Joan Mir and Alex Rins, who started eighth and 13th on the grid respectively. Both Suzuki riders overtook pole sitter Franco Morbidelli in the final stages of the race and nearly caught up with the leader but ran out of time as a relieved Quartararo returned to the podium for the first time in six races. Quartararo now leads the championship with 108 points –– eight ahead of Mir and 18 clear of Yamaha’s Maverick Vinales, who had a poor start and finished ninth. Ducati’s Andrea Dovizioso crashed out in the first turn on the opening lap after he started 17th on the grid. The Italian has now dropped to fourth in the standings, 24 points back. The next race is the French Grand Prix on Oct. 11.