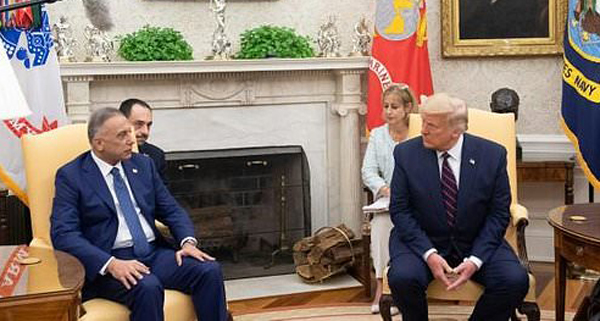 Enraged by near-daily attacks on its interests in Iraq, Washington has threatened to close its embassy in Baghdad, in a blow to a premier seen as a bulwark against Iran. Iraq has long been caught in a tug-of-war between its allies Iran and the US, rendered rockier by Washington’s “maximum pressure” policy against Tehran since 2018. In a new escalation, US Secretary of State Mike Pompeo called Iraqi President Barham Saleh last week to deliver an ultimatum, Iraqi and foreign officials told AFP. Unless Iraq’s government puts an end to the rockets raining down on US military and diplomatic sites, Washington would shutter its embassy and recall its troops, the sources said. “The Americans aren’t just angry. They’re really, really, really angry,” one Iraqi official told AFP. Another said: “The honeymoon is over.”

The US still has hundreds of diplomats in its mission at the high-security Green Zone in Baghdad and around 3,000 troops based in three bases across the country.

Since 2019, dozens of rockets and improvised explosives have targeted these sites, with US and Iraqi officials blaming Tehran-backed factions including Kataeb Hezbollah. Washington has twice retaliated with strikes on Kataeb Hezbollah in Iraq and threatened earlier this year to bomb more than 120 further sites if the rocket attacks cost American lives, a top Iraqi official told AFP. The frustration failed to ease even after Mustafa al-Kadhemi, seen as Western-leaning, took office as premier in May. Ahead of Kadhemi’s visit to Washington in August, the US signalled it was “unsatisfied with his actions” against pro-Iran armed groups, an Iraqi official said. The US declined to comment on Pompeo’s latest call, but a State Department official told AFP that “Iran-backed groups launching rockets at our embassy are a danger not only to us, but to the Government of Iraq”.